[German]It seems, Microsoft has some trouble with Windows Update. Windows Insiders testing  Windows 10 Technical Preview will be notified about new builds 9933/9934, but this update fails with error 0x80246017. Also users of Windows 8.1 are facing trouble. Windows Update offers updates for Inventec drivers, even, if a machine doesn't contain an Inventec network card. Here a few observations, insights and explanations.

Remark: Although this blog article discusses Windows Update, it seems, that there are two distinct issues (wrong updates for "Windows 10 TP builds" and "wrong driver updates for some machines").

I've mentioned this issue a few days before within this article Windows 10: Rollt Microsoft Build 9931/9932 aus?, published in  my German blog. Testers of Windows 10 Technical Preview (Build 9926) are offered new builds (9931, 9932, 9934). But an attempt to install this update results in update error 0x80246017. Microsoft employee Gabe Aul has confirmed at Twitter, that this is an internal Microsoft problem. (Link, Link). 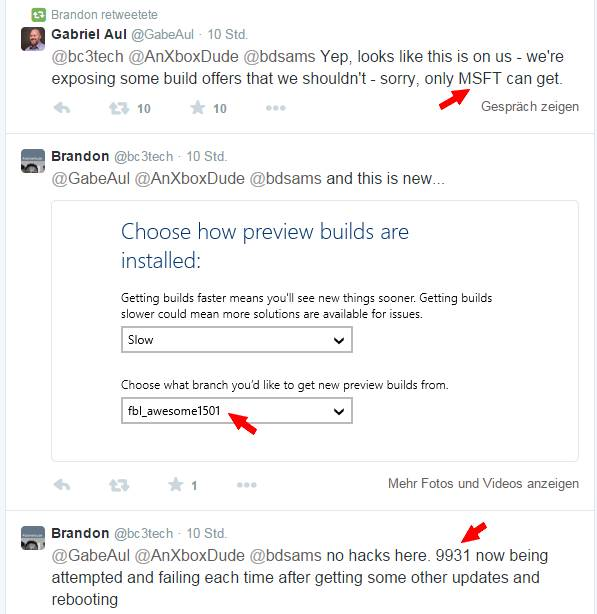 So lets hope, Microsoft will solve this Windows 10 Technical Preview issue in near future.

Yesterday I received an e-mail from blog reader Oliver V., pointing out a mysterious effect. Oliver wrote, that he runs a fully patched Windows 8.1 system, and Windows Update offered an optional update on January 23th for an

"The problem is", Oliver wrote, "my machine doesn't contain any hardware from Inventec". According to Oliver, his network adapter contains a Realtek chip. So he disabled this driver update, because the update doesn't offered a detail description.

Yesterday Windows Update offered him another optional driver update for the following device:

Oliver mentioned, that his notebook doesn't contains Toshiba hardware. He also disabled this driver update too. Searching the web brought me to several sites, where similar issues with "phantom updates" are discussed. Within this MS Answers thread the issue is discussed for Windows 10 Technical Preview (Build 9879). But some readers points out, that the same Windows Update issue occurs in Windows 8.1. One user reports, that his Windows 8.1 system was bricked after installing the driver update.

Devices are granted a hardware ID and a vendor ID, both are contained within the inf file used for driver install. This forum thread contains a discussion about the Inventec network driver issue and a possible explanation. Inventec has used RealTek network chips on some network boards. The manufacturer code 10EC, issued for their driver belongs to RealTek (see) and will be used for RT8129 Ethernet drivers. To differentiate between similar devices, a manufacturer has to issue a driver subsystem code within the drivers inf file. This subsystem code allows to identify each device in a unique way and install the appropriate driver.

There are some guesses, that Inventec just used the generic ID code without issuing the sub system code. Therefor the Inventec driver will be offered to all systems containing a RealTek network chip. That's not a major problem, as long, as Inventec network driver will support RealTek network chips and adapters in a proper way. But if that isn't the case, users will facing some serious trouble.

So it seems that either Inventec or Microsoft (or both) failed to distribute the appropriate driver via Windows Update. BTW: Are you affected by this update issue? Comments are welcome.