I’ve got a first hint two days ago when a blog reader informed me about this issue. Two of his customers are facing serious trouble about updating Windows 7 machines on Microsoft patch day (04/12/2016). Both machines are failing to boot the operating system and ending with a “Secure Boot Violation” message. After searching the web, I found another thread where a user reports this behavior. 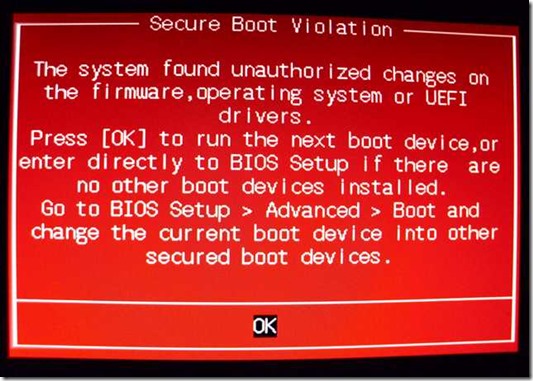 It seems, that some ASUS and ASRock mainboards are causing trouble with Windows 7. Although Windows 7 doesn’t supports “Secure Boot” on UEFI systems, it seems that this features has been enabled after updating Windows 7. In comments to my German blog post several other users are confirming this issue with different mainboards.

Workarounds has also been posted. One user reported that the UEFI settings on a SUS H97 plus main board was set to “Secure boot” – but was grayed out – so he wasn’t able to disable this mode. His workaround was to set the option to “Other OS” (see German edition of my blog post). Afterward, Windows 7 was able to boot.

Another user proposed for the Asus H97M-Plus Board a different workaround (see this German source) – because the “Secure boot” can’t be disabled. So the solution was to delete the Secure Boot keys within BIOS settings. It hasn’t be the first time, that Microsoft’s updates are causing such an issue (see here).

Update: According to this Technet thread patch KB3133977 for Bitlocker (released in March 2016) has been identified as root cause for boot error. In April 2016 this patch was updated (Meta file information was updated).