[German]Microsoft released Windows 10 Build 15019 for Insider Preview in Fast Ring. It seems, that many users are facing serious trouble installing this build, due to error 0xC1900401 or an "Initializing update" hung. Here are a few hints to solve this situation.

Some users are facing an error code 0xC1900401 or the message "build not yet available" during an attempt to search for build 15019 via Windows Update. But this glitch has been identified by Microsoft's developers – and they fixed this error (see the first part of  Microsoft's employee Jason's MS Answers post).

Many users are facing a more serious issue during downloading and installing Windows 10 Build 15019 (from build 15014). I received this error on my test machine, so I was able to document the error and test a few steps to cure the problem.

First I tried to do a clean boot (press Shift key and select reboot), but I have had no success (tried it twice). Searching the web, gave me this MS Answers forum post, where people succeeded after up to 9 reboots.

Another cause for "an update stuck" (mostly at 30%) has been reported here by leedsync: A microSD card left in a card reader of a Surface Pro 3 was the root cause.

Issue:  Your PC scans and finds build 15019, but it appears to hang on "Initializing…" and doesn't appear to begin downloading the build

Impact:  Any Insider may hit this issue (although it does not affect all users)

Workaround:  The workaround for this is detailed in the steps below:

Well, while I appreciate his suggestion, there is a "small" problem. I tried that this night – long before I read Jason's post in MS Answers. My idea was to rename Windows subfolder SoftwareDistribution to reset Windows Update store – because I've seen: Windows creates a couple of files within SoftwareDistribution/Download.

Remark: My observation, that Windows creates (probably during initialization) some new entries in SoftwareDistribution/Download may have to do with the new Unified Update Platform (UUP). So I thought, that deactivating UUP and go back to .esd delivery could be an option to fix the "Initializing update" issue. Details about to disable UUP may be found here. A user confirmed, that this will help, within a comment left within my German blog post.

I recognized that Service manager wasn't able to stop Windows Update service – I received a timeout message. Well, it could be an issue on my machine, but as a Microsoft Answers community moderator I came across several user postings within the last months, claiming the same behavior for distinct Windows 10 builds. And I also have had tested it a couple of weeks ago. My attempt, to stop WU within an administrative command prompt, caused an error, that this service could not be terminated. After terminating other services, I was finally able to stop also WU.

To sum it up: It seems that there are some issues in Windows 10 preventing an administrator to terminate WU service via service manager or via an administrative console. In some cases it helps to reboot the machine and try again to stop WU service – but this is pretty complicated/time consuming (so I prefer the reset WinRM thing).

Some users are reporting that running update troubleshooter has also fixed the "Initializing update" thing.

A possible solution may be also to open an administrative command prompt window and try the commands listed below (stops services, rename SoftwareDistribution folder and starts services again).

Rebooting a machine several times in the hope that Windows Update will be able to download build 15019 is time consuming. The other suggestions given above wasn't available in my environment. So I decided to use a more simple solution (see also) and reset the WinRM service.

This will restart the WinRM service. I tried it and was greeted by error 0x80070020, that means ERROR_SHARING_VIOLATION. Then I repeated the update search and was facing the "Initializing updates" message again.

I tried to restart update search again and after a while I received error code 0x80246007. This stands for WU_E_DM_NOTDOWNLOADED – The update has not been downloaded. 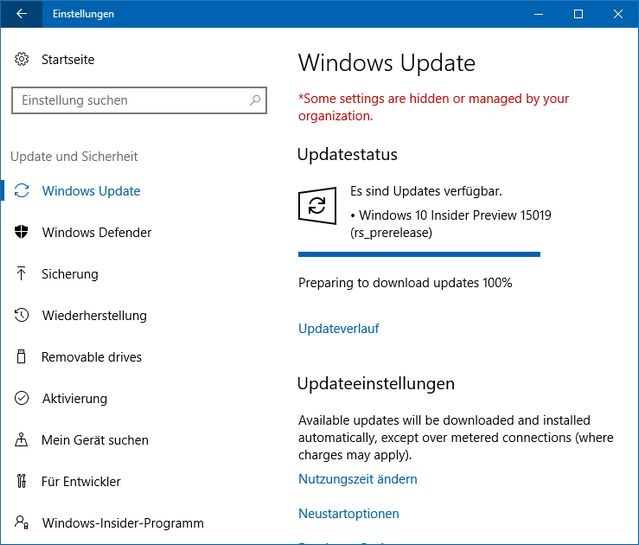 After restarting update search again, I was greeted by a 100 % progress bar indicator (see above). At a first glance I thought the new update will be installed. But it just indicated, that preparing the download was successful. 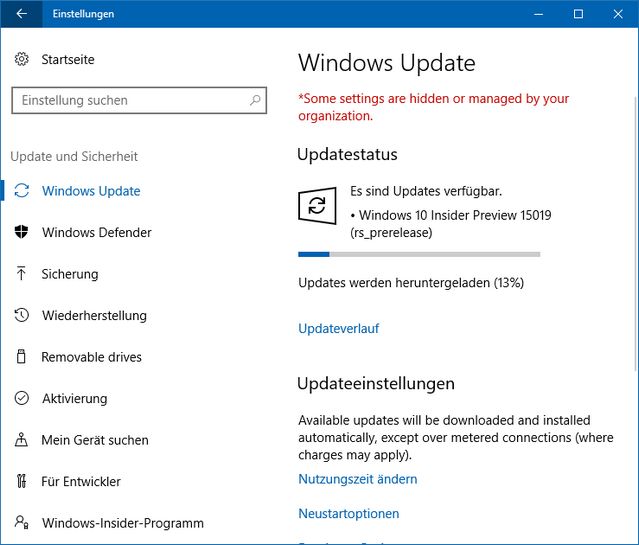 But finally, a new update search has been started automatically and the progress bar (see screenshot above) begun to show some download progress. And I recognized this time, that something happens – my network bandwidth dropped, so I'm no more able to access the internet from other devices within my network. 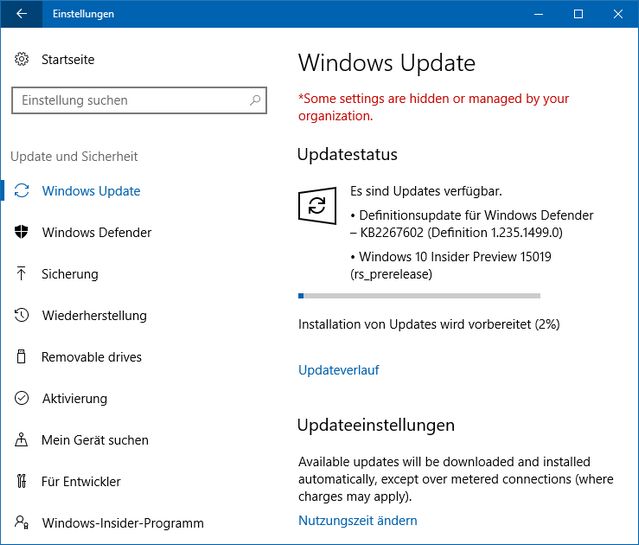 The status of my test machine so far: Downloading build 15019 has been finished – now I see the preparing "Installation …" progress bar in my Update page within Settings app (see screenshot above).

The screenshot above shows also, that an Definition-Update for Windows Defender is pending. So the suggestion mentioned above (found in MS Answers) could also be helpful to prevent conflicting updates between WU and Defender.

If the update downloads, but stucks at installation (without a microSD card or 2nd drive connected), try to analyze the log files created during upgrade (see Windows 10: Analyze upgrade errors).