Within the document Windows Server Semi-annual Channel Overview has detailed the planned changes to Windows Server 2016. Windows Server release model is offering a new option in order to align with similar release and servicing models for Windows 10 and Office 365 ProPlus.

The Semi-annual Channel releases, available for volume license customers, will deliver new functionality twice a year, in spring and fall. Each release in this channel will be supported for 18 months from the initial release.

This is the release model already knows for Windows Server 2016, where a new major version is released every 2-3 years. Users are entitled to 5 years of mainstream support, 5 years of extended support. And there are optionally 6 more years with Premium Assurance. The following image shows the release cycles for the two channels. 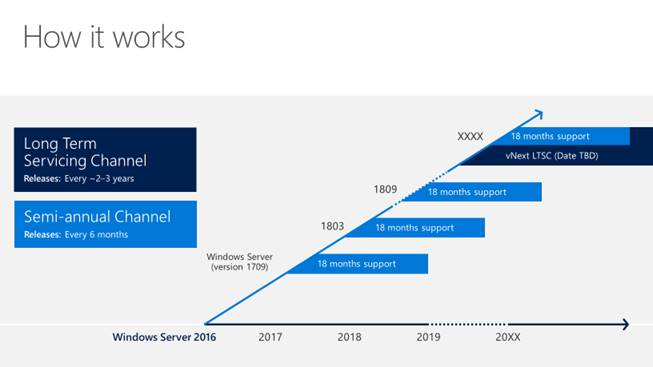 This entry was posted in Update, Windows and tagged Windows Server 2016. Bookmark the permalink.