[German]Microsoft is ending Current Branch for Business (CBB) in Windows 10. And Microsoft has recently detailed some internals about Feature Upgrade installs. This blog post sum up the relevant details.

Microsoft has used Current Branch (CB) and Current Branch for Business (CBB) within gab Windows 10 Pro/Enterprise. Admins has been able to defer Feature Upgrades in CBB for several months. In May 2017 Microsoft announced, that they are going to use new names (see).

This has also been detailed within this Technet blog post from Michael Niehaus from July 17, 2017. More important are the support cycles for both channels.

More details may be read within this Technet post. This is the first important change, announced from Microsoft.

Microsoft has introduced a Mixer channel for Windows Insider, where developers from product group are introducing some technical details. The first web cast has been held at June 14, 2017 – unfortunately, the session will be streamed only in real time and can’t be viewed later. Within the first web cast Microsoft has given a few details what’s going on during Feature Upgrades. Russian leaker WZor has joined this web cast and published some slides. According to the following slide, a Windows 10 Feature Update (which is an Upgrade, exchanging the whole operating system) is installed in four phases.

During these four phases, several task will be executed. The slides below shows, what’s going on within a phase (click the slide to zoom in an new browser tab). 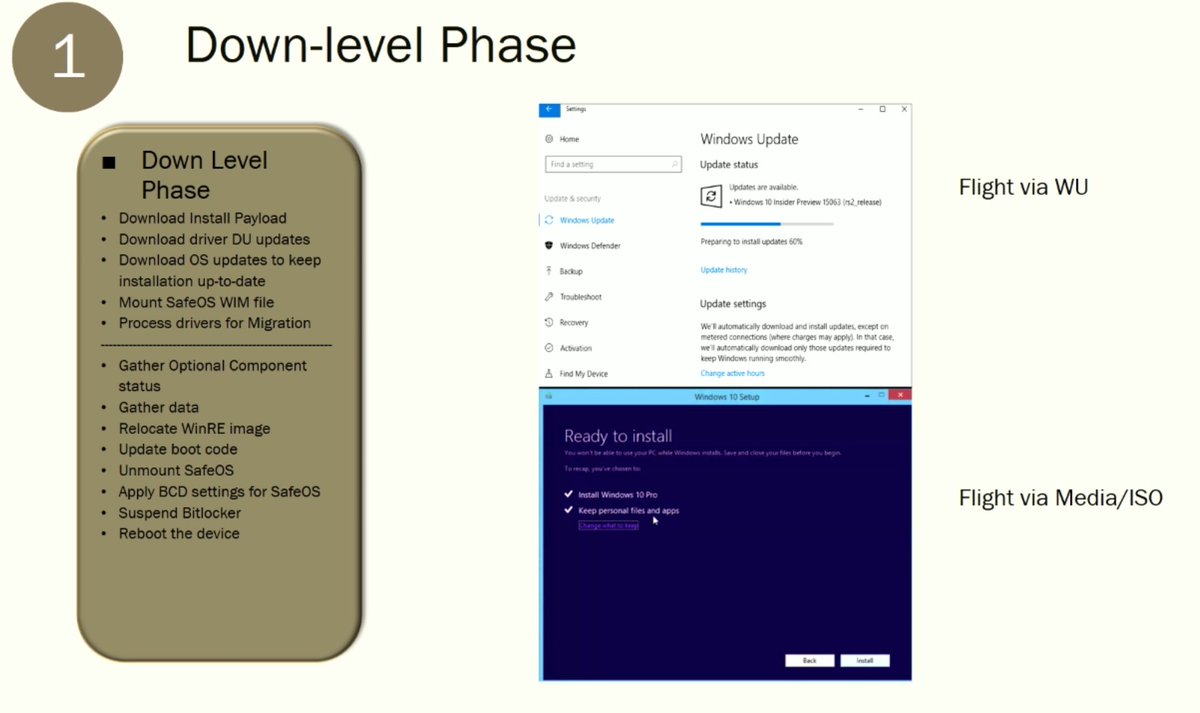 These details may be helpful, if a Feature Upgrade install fails. WZor has posted more slides on Twitter.

Two semi annual Feature Updates are annoying many users, especially, because it takes a long time to install. During install, the system in not useable. If an install fails, users are wasting a lot of time waiting for install steps – and Windows Insiders are ‘enjoying’ this weekly.

Microsoft has published recently some details for Windows Insider within Feedback hub about Feature Update installs. They say, the install process has been optimized. Now the following steps (see also the section above) are applied:

This shall reduce the ‘down time’ for users during Windows Feature Updates. Let’s wait, how good this will be at the end of the day (we will see it during Windows 10 Fall Creators Update release in September 2017).