[German]Some users of Windows 10 (Fall Creators Update) are facing a strange issue. The store did not work anymore. After launching the app, an error message occurs, reporting a wrong layout for manifest. Addendum: An Store app update has fixed the issue – see details within the blog post.

The error occurs immediately after the user invokes the Store app in Windows 10 Fall Creators Update. The app shows the following error message:

I stumbled upon this error a few days ago at AskWoody.com within this post. But searching the Internet, many hits will be shown. Microsoft has mentioned it within a Tweet for Windows Insiders on end of September:

#WindowsInsiders we are aware of the Store not being available. We are investigating.

I haven't had the time to investigate the error in detail, but I run a few tests. Here is, what I tried without success.

I haven't tested to clean the store cache manually. What we also can do: Reset the store via Settings app.

1. Open the Settings app and click the Apps icon within the start page.

2. Then search the entry Store in Apps & features and click Advanced options. Then click the Reset button shown within the following window.

What has fixed it temporarily

In Windows 10, maybe only on systems coming from Windows Insider previews, there is a bug. I found at Microsoft Answers this thread, where somebody mentioned:

I recently had this problem and realized my region settings were incorrect.  I set my Region and Language settings correctly and that fixed the problem for me.

I toke the chance to check my region settings in Settings app and in control panel. But the time, the region and other settings was proper. Then I went to the Location tab in Region settings, and changed the location from Germany to United States. 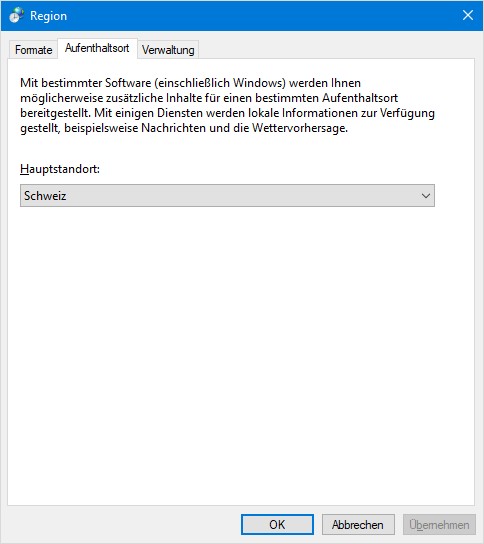 I was also able to set the location to France – and suddenly the store works. After going back to Germany, the store fails again with the above message.

Side note: I've run also a sfc /checknow command, which fixed some files. But after rebooting the machine the error came back. I got also feedback from experienced German Dr. Windows forum members, observing this error a week. They are confirming that sfc and dism repair didn't fix the issue. The error comes back after reboot. Also setting the location to USA or another country is only a short workaround. Installing apps from a wrong region leads to other issues.

It's always a good idea, to check Windows for damaged system files. I've discussed the steps within my blog post Check and repair Windows system files and component store. I've tried the sfc check on the affected machine and some files has been repaired. Directly after that check and also after a restart, the error was still present.

When I wanted to do the next test on an other day, I observed a surprising effect. When I was changing the location from United States back to Germany, the error message appeared in the opened Store window for a second, and then disappeared. I will observe it further.

Later I recognized some comments within my German blog, where users reporting that the store app has been umpdated. So a fix may be: Use the temporary solution and set the location to United States. Launch the store and wait, until all apps are updated. Then switch your location back to the value representing the place you are located, and check, if the store still works.

Addendum: I've checked the details. The Store app has been updated on October 19, 2017 to build 11705.1002.9.0. This fixes obviously the bug preventing the Store app from operation.

A German blog reader mentioned within a comment, that he opened an administrative command prompt windows (using Run as administrator). The he uninstalled .NET Framework 3.5 using the command:

After a Windows restart you should try to set the location back to the old value representing the country you are living. Then check, whether the store works again. The problem with this workaround: Probably applications requiring .NET Framework 3.5 won't work anymore. Curently I can't test this, because my store works.

So it's obviously a bug. The manifest for the store conflicts with the settings for the operating system language. Or some manifests are broken, and a restart or set a location, will copy the damaged data to the store data area. I've escalated this MS Answers thread to all forum moderators, in the hope, that someone reports it to the Windows product group. I guess Microsoft has to fix that issue.