Interesting question: how many systems are running Windows 10? And how is the distribution of Windows 10 versions. Both data has been released November 29, 2017 or before.

Woody Leonhard mentions at askwoody.com, that active devices are not active users. And it's not clear,  what Windows 10 devices means. Does is mean only desktop, or does it includes Xbox, Smartphones and refrigerators (IoT devices) with Windows 10.

AdDuplex has also released figures for the version distribution of Windows 10 for November 2017. At the end of October, version 1709 had reached 5.3% of the systems. Here are the latest figures published by AdDuplex. 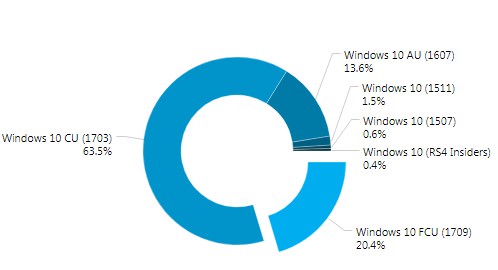 Windows 10 Creators Update (V1703) is still at 63.5%. Windows 10 Anniversary Update (V1607) has already dropped to 13.6 % (the version with support until 2023). Windows 10 Fall Creators update (version 1709) has climbed to a whopping 20.4 %. The older versions of Windows 10 are practically irrelevant. So it looks as if the new build is spread even faster than the Creators update. Note: But the Anniversary Update, however, arrived at 30% of the devices after this time. This is probably also supported by the OEMs, who are quickly shipping new machines with Windows 10 Fall Creators Update (see following graphic).

More details may be found within AdDuplex report. AdDuplex's monthly usage summary for Windows devices is based on the approximately 5,000 Windows Store applications that use the AdDuplex SDK.