[German article]German antivirus vendor Avira has begun recently to deliver Avira Launcher with it's paid version of Avira antivirus software. Users are complaining about this step.

PUP stands for Potentially Unwanted Programs, unwanted software bundled with other software that will be installed with the main program. We know this from Adobe Flash Player or Oracle's JAVA, where the installer is shipped with McAfee antivirus or other unwanted and useless tools.

Avira antivirus seems rather popular in Germany and also in other countries like the USA as well. Now it seems that Avira made a wrong step adding Avira Launcher to its paid Avira Pro. I've been informed by a German blog reader, who left me a comment. After I blogged about that topic in my German blog, the article has been read and commented many times.

The free version of Avira anti virus software has been shipped with Avira Launchers for a while. Clicking the task bar's status area shows a popup with additional icons granting access to additional features. 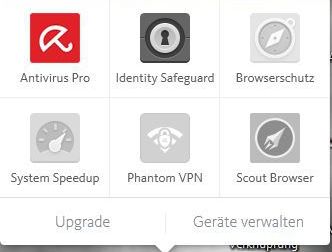 It seems that the tool collects and reports some user system data to the Avira cloud – which seems ok for granting a free version of Avira anti virus protection.

But now the paid version also receives the Avira Launcher

Users of Avira Pro reporting since weeks that Avira Launcher has been installed also on their systems. This forum discussion (deleted) in German Avira support indicates that the Launcher will be installed from Avira Pro Version 15.0.18.354 onwards.

I've also found a discussion from 2014 where users are complaining about the "new launcher" in a beta program.

My personal recommendation for Windows users is: use Windows defender from Windows 8 onward and Microsoft Security Essentials in Windows Vista or Windows 7. This Microsoft antivirus solutions provides a basic protection (comparable to free third party AV solutions). If I read the forum posts in the right manner, many users now dropping Avira antivirus solutions due to the Avira Launcher issue. What you're your opinions about the Avira Launcher attempt in the paid version of Avira Antivirus Pro?

This entry was posted in Windows and tagged antivvirus, Avira, PUP. Bookmark the permalink.