[German]Currently it seems, that some users are facing serious issues with Microsoft’s Windows Store. Here are a few details (what I’ve found out) about that topics so far.

It started this morning, when I read a short article from my German Windows Insider MVP colleague Martin Geuß at Dr. Windows. A German reader tipped Martin, that he can’t reach Windows Store with his Windows RT Surface. 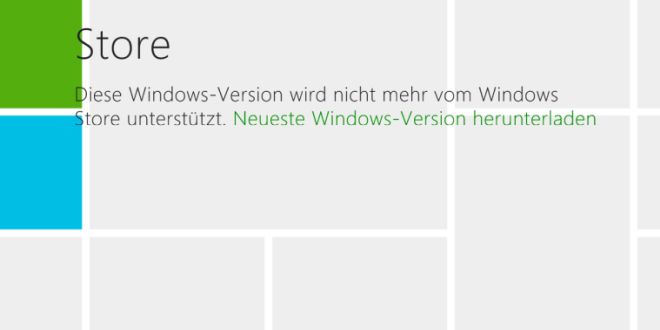 The user received the message shown above, saying, that his Windows version isn’t supported anymore from Windows Store.

This version of Windows is no longer supported by Windows Store.

The recommendation to upgrade to a new Windows version isn’t helpful for Windows RT users (they can upgrade from Windows RT to Windows RT 8.1, but that’s the end). Martin Geuß raised the question, whether Microsoft has pulled the Windows Store for Windows RT.

There are more cases

I searched the Internet and found at reddit.com this thread, where a Windows RT user reported 3 days ago the same issue. Some users posted a feedback, that the Windows Store is still reachable in Windows RT. Within this forum thread somebody wrote, that he updates his Surface RT to Windows RT 8.1. After that, the Store app reports:

This version of Windows is no longer supported by Windows Store.

But searching the web, it seems that it’s an issue for more Windows-Platforms. Within the comments of Martin’s article, I found a note, that the issue has been observed for:

but not all users are affected. Overall it seems that Microsoft’s Store App and Microsoft’s Windows Store is the most unreliable thing ever. Not good news for Windows RT users and imho really bad news for upcoming Windows 10S (S stands for Store only) users. As a rule of thumb: Keep your fingers away from Windows apps and Windows Store.

Addendum: Martin Geuß has posted the issue within US MS Answers forum (thx to Barb Bowman for this tweet and @woodyleonhard). Till now, there is no solution.

It seems that the issue has been fixed – see Windows (RT) 8.1: Is the Windows Store outage fixed?

13 Responses to Is (Windows RT) Windows Store partially down?