Adobe Flash: usage is fading away

The end of Adobe's Flash player has been announced for 2020. But there are still some Flash applications and web sites using Flash content. But the use of Flash is fading more and more.

Adobe Flash support will end in the year 2020 – I had addressed it within the blog post Fake News: Flash is dead? No it's fading out is planned 2020. From December 2020, Google will completely remove Flash in the Google Chrome 87 browser. The announced end of Flash will also affect the use of Adobe Flash.

The percentage of daily Chrome users who load at least one page of Flash content per day has dropped from around 80% in 2014 to less than 8% at the beginning of 2018.

These figures were released by Parisa Tabriz, Director of Engineering at Google, during a keynote speech at the Network and Distributed System Security Symposium (NDSS) held last week in San Diego.

Tabriz, one of the Google employees responsible for Chrome's security, gave a talk on the development of security features in Chrome and the web platform. Further details as well as the graphic with the trend can be found here. 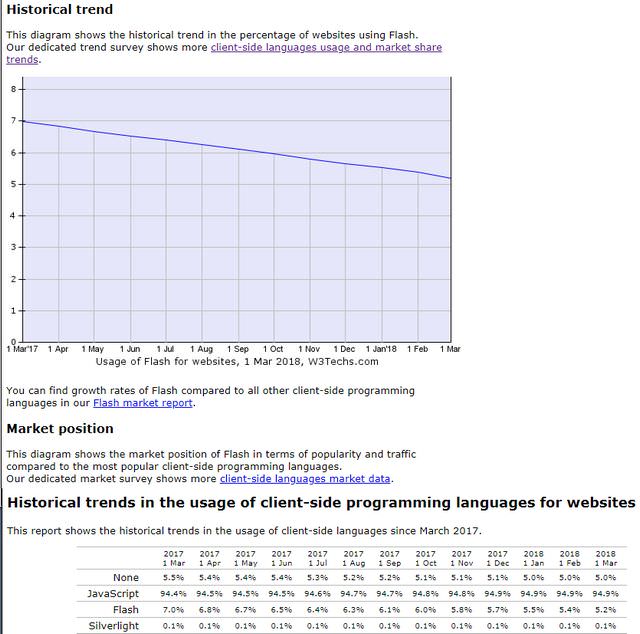 The site w3techs.com has a statistic that shows a usage of Adobe Flash has just fallen to 5.2 % (referring to all browsers).

This entry was posted in Security and tagged Flash. Bookmark the permalink.