[German]Microsoft seems to be undergoing a radical change in strategy. The next operating system Azure Sphere OS for Internet of Things (IoT) will no longer be based on Windows, it’s based on a customized Linux kernel. Here are some information about the brand new development.

We have recently learned that hell freezes over and Microsoft also marries Linux to Windows. There are also projects in which Linux is used internally at Microsoft because the own solutions are not suitable. For example, Microsoft’s Miracast receivers are based on Linux. The Azure Cloud Switches are also based on Linux (see my German blog post Wenn die Hölle zufriert: Microsoft macht in Linux).

I just read this tweet from Paul Thurrott, mentions the sensation, announced during a live Security Briefing:

Microsoft’s Next OS is Based on Linux, Not Windows – https://t.co/eKN0Vu8Ud4 pic.twitter.com/edFgEJkZsG

“Of course we are the Windows company,” said Brad Smith of Microsoft during the webcast while holding up a tiny IoT-optimized microcontroller chip (MCU). “But what we do realize is that the best solution for a computer this size – a toy – is not a full version of Windows. It is what we create here.”

The video above shows the IoT MCU chip that Microsoft is developing for these devices. Microsoft has developed (codenamed Sopris) a new operating system for small MCU-based IoT devices based on Linux.

“It is a custom Linux kernel complemented by the kinds of advances that we have created in Windows itself,” says Brad Smith.

It is a Microsoft-adapted Linux kernel that has the same ‘improvements’ that Microsoft uses on Windows. Azure Sphere consists of hardware and software. Microsoft has developed “a completely new class” of microcontroller units (MCUs) that are more than five times more powerful than older MCUs. These designs will be licensed to partners without royalties, and the first on board will be MediaTek. Quote from Brad Smith:

“For anyone who has been following Microsoft, you will see that this is the first day in 43 years that we announce that we will distribute our own Linux kernel. It is an important step for us. It is, I think, an important step for the industry. And it will enable us to stand behind the technology that I believe the world needs.”

The security webcast also revealed that Microsoft has developed a new Azure Sphere Security Service. It protects any Azure Sphere device by securely communicating between devices and devices, identifying new threats and renewing itself as needed. 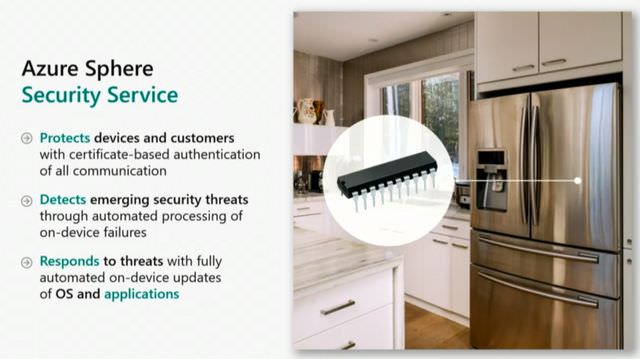 Meanwhile you can find additional articles at Microsoft (Introducing Microsoft Azure Sphere: Secure and power the intelligent edge, Using intelligence to advance security from the edge to the cloud).