[German]Here is my Friday post with a short collective article about some of the issues surrounding the Microsoft July 2018 patchday. Microsoft has admitted the installation error 0x80092004 as known for the.NET-Framework Update KB4340558. Update KB4018385 has also been withdrawn. 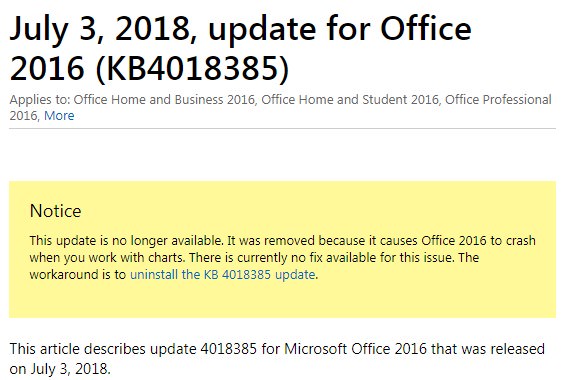 Now Microsoft has pulled update KB4018385 for Microsoft Office 2016, the KB article shows the note visible within the screenshot above (thanks to the German blog reader for the hint). Addendum: The update has been pulled due to crashes of Office 2016 while using charts (see). Woody Leonhard has compiled the whole story with history at Computer World.

We look after several small business clients and this morning 3x different clients reported mail flow issues (all are running single-server installs of Exchange 2010 SP3 on Windows Server 2008 R2 Std, or similarly set up SBS 2011). They all have Windows Updates set to Automatic, and all installed the latest updates successfully last night. However this morning at different times between 9-11am they each stopped getting inbound email, and we could see it queuing at their scrubbing provider. After investigation it seems that the Exchange Transport service is not responding. On one of the servers we actually saw errors in the event log saying the server had timed out connecting to itself (exchange transport), but on the other two there were no errors. If we try to stop the service, it just hangs at 'stopping' for over 30min so we reboot the server and after the reboot everything was normal again and mail started flowing again.

After patchday July 10, 2018, some clients have problems exchanging mail with an Exchange Server 2010 SP1 (running on Windows Server 2008 R2 Standard). The clients do not receive mails any more. Several users confirm this, and later it is confirmed, that update KB4338818 to be the problem:

Throwing some more into the mix. On the machines with the update, there was an indication that it could no longer find the Microsoft Exchange Transport and that you couldn't just restart the service. According to https://support.microsoft.com/en-ie/help/4338818/windows-7-update-kb4338818 there is some adjustments to DNS, which as we know must be working for Exchange to function well. There is also mention of the network interface changes.

I found also a thread at German heise.de site, where issues on Exchange Server 2010 caused by KB4338818 are reported.

I've got something else too. Should also not be installed.
There was also a MSSQL update 2016 KB4135048 for the OS updates
This kills the reporting service.

Michael pointed me to this German MSDN forum thread, where the issue has already been discussed. Here is my translation:

– you can no longer access the web portal URL
– in the event log that contains the application
Microsoft.ReportingServices.Portal.WebHost.exe
is faulty
– the server produces log files without content (0 KB), but very many of them (from Friday morning to Monday noon 17,000 pieces).

Server restart is useless; stopping the service "SQL Server Reporting Services" stops the creation of these log files, but of course it does not solve the problem…

Also this English MSDN forum post addresses the same error. Currently I receive the tip, not to install July 2018 patches (at least for Windows Server 2008 R2) due to 'quality issues'. More will follow.