[German]Short question to Windows 10 owners: Have the Windows 10 August 2018 updates appeared twice and with the text ‘Internal – Corpnet required’ within the list of upcoming updates?

Susan Bradley, who is engaged as moderator at patchmanagement.org, has recognized frequent reports of duplicate August 2018 updates on Windows 10. The duplicate updates are displayed on affected systems with the addition ‘Internal – Corpnet required’. If you search for the term ‘internal – corpnet required 2018-08 cumulative update’, there are many hits (1, 2, 3, 4, 5). 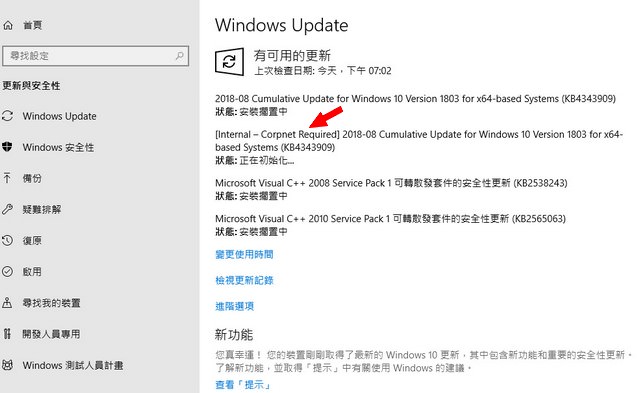 The above screenshot is from a Chinese version of Windows 10 V1803 and was posted in the Microsoft Answers forum. On superuser.com you can find the following screenshot of an English Windows with the same entry:

The affected person tried a fresh installation there, and the error was gone. According to what I saw during a web search, the problem has been occurring since August 2018 Patchday – first hits are from August 15, 2018.

In tensforum.com there is this entry, in which the whole thing is discussed. Internal – Corpnet Required] indicates that this update is intended as a test version for internal use at Microsoft.

Microsoft seems to have some problems with shipping updates to the right machines. Over the weekend, I reported in the German blog post Ups: Insider Build regulären Windows 10-Nutzern angeboten that Windows Insider Previews were offered to regular Windows 10 users.

Is Microsoft aware of this issues?

I guess, Microsoft might be aware of this issue, because this article was published in the Microsoft Answers forum on August 17, 2018:

Volunteer Zackary Vanosdol writes that the error is known and gives hints for solving the problem.

Hello! Sorry you are having this issue. Hopefully we can fix it.
Go to PC settings > update & Security > troubleshoot > windows update

The affected user confirms that a multiple execution (3 – 4 times) of the update problem handling has eliminated the duplicate entry. Later on I found that this hint has also been given in local Microsoft Answers forums (spanish for instance) by Microsoft moderators.