The next attempt – with some ‘failures’

It was expected, that Microsoft will re-release Windows Server 2019 on November 13, 2019. But they can’t even handle that in Redmond. This afternoon (here in Germany) I saw Tero Alhonen’s message on Twitter:

But the article was gone a short time later – I got an error page visiting Microsoft’s blogs – obviously the article has been released too early and was ‘pulled’. 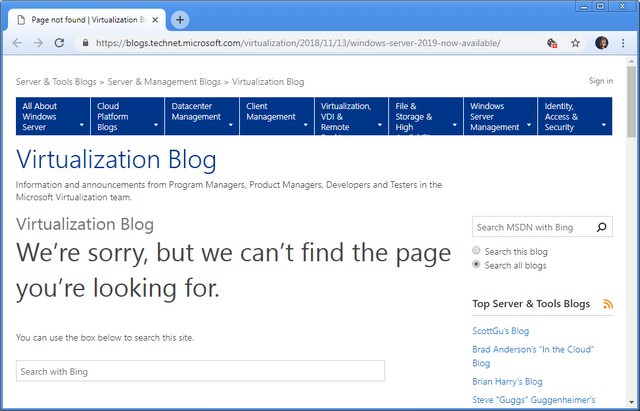 Now the release is official

On October 2, 2018, we announced the availability of Windows Server 2019 and Windows Server, version 1809. Later that week, we paused the rollout of these new releases to investigate isolated reports of users missing files after updating to the latest Windows 10 feature update. We take any case of data loss seriously, so we proactively removed all related media from our channels as we started investigation of the reports and have now fixed all known related issues.

In addition to extensive internal validation, we have taken time to closely monitor feedback and diagnostic data from our Windows Insiders and from millions of devices on the Windows 10 October 2018 Update. There is no further evidence of data loss. Based on this data, today we are beginning the re-release of Windows Server 2019, Windows Server, version 1809, and the related versions of Windows 10.

November 13, 2018 marks the revised start of the servicing timeline for both the Long-Term Servicing Channel and the Semi-Annual Channel. For more information please visit the Support Lifecycle page.

Within the Technet blog post Microsoft has published the commands to pull Windows base images for docker.

This entry was posted in Windows and tagged Windows Server 2019. Bookmark the permalink.