[German]Microsoft has begun to re-design it’s Office modules. They experimenting with the ribbon– at least in Office online. And Microsoft has just released information about a new design for Office application icons. Here are some information and thoughts on the topic.

John Friedman, head of the Microsoft Office Design Department, published recently the article Redesigning the Office App Icons to Embrace a New World of Work on Medium. His credo:

Design is becoming the heart and soul of Office.

Friedman explains how Microsoft has developed visual identity to ‘reflect the simple, powerful and intelligent experiences of Office 365’. 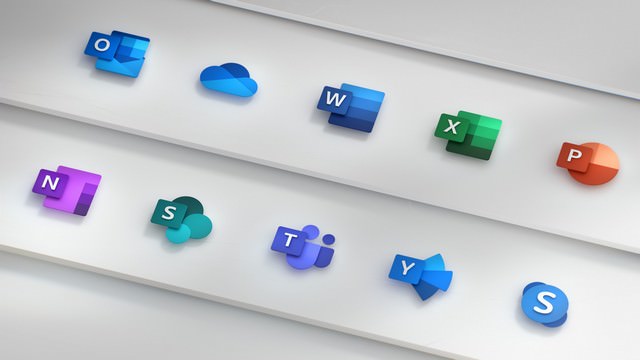 The whole thing was ‘urgently’ needed as the last revision took place in 2013, as Friedman writes. Furthermore, the new design should work across different device categories (desktop, mobile) and also look good. The image above shows the set of new icons that will be used across devices for Office applications. As a contrast – for nostalgics, so to speak – Friedman has posted the various Word icons designed during the past.

The whole thing is presented in the following YouTube video – so from 00:40 (the video embedded here starts from this time mark) they are talking about the new icons.

Experimenting with a simplified menu ribbon

There is a second point, which I have noticed in the last weeks. When updating a book for beginners about Microsoft Office 2019, I also took a look at the OneNote app. At some point, I accidentally came across Office Online when I opened a OneDrive OneNote document. I noticed a simplified representation of the Office Online menu ribbon.

The above screenshot (it’s a German Office) shows this new simplified ribbon and the Simplified Ribbon option to disable it. Below you can see the old OneNote Online ribbon, which has been common since Office 2007 and can be optionally hidden or displayed.

Then I noticed a few days ago a German article from Martin Geuß (Dr. Windows) mentions that Microsoft experiments with a simplified ribbon, and ask it’s users for feedback. After searching the web, I found the English Simplified Ribbon Survey, where Microsoft asks for feedback.