[German]Microsoft has surprisingly released the ISO installation images for the Windows 10 May 2019 Update (Version 1903) for MSDN subscribers. MSDN subscribers can now download and test this Windows 10 build without having to be an insider.

A few days ago there was already hope that non-insiders would be able to download Windows 10 May 2019 Update (Version 1903) as an installation medium via Media Creation Tool (MCT). But this turned out to be a duck, because although a modified MCT version existed, Microsoft did not yet provide any relevant files. The MCT downloads version 1809 as an installation image. I had reported about that in the blog post Useless Media Creation Tool for Windows 10 V1903 released.

For MSDN subscribers, however, the situation is now different. Blog reader EP tipped me in a comment, that something had happened at MSDN – some US blogs already reported about that. I checked my MSDN subscription. In fact, Microsoft has made the files needed for Windows 10 V1903 available for download on April 18, 2019. 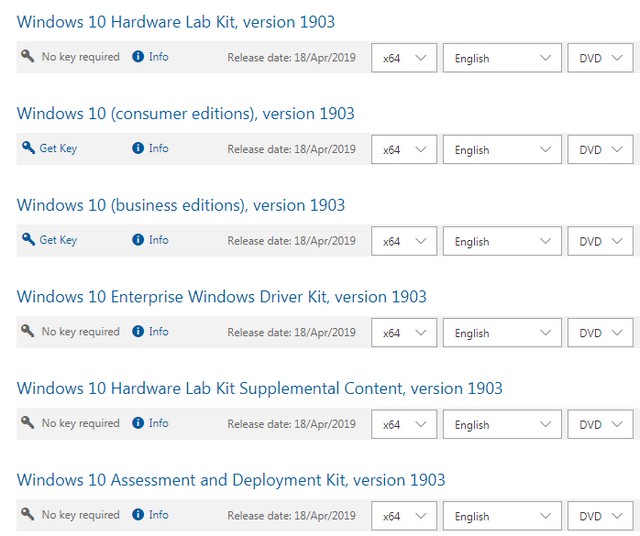 This is a bit surprising, as Microsoft explained in this blog post at the beginning of April 2019 that commercial users should not receive Windows 10 until the end of May 2019.

Our commercial customers can begin their targeted deployments in late May, which will mark the beginning of the 18-month servicing period for Windows 10, version 1903 in the Semi-Annual Channel.

However, MSDN subscribers can now download the following installation images and files:

This allows corporate administrators to begin testing this version of Windows 10. On the other hand, this means that Microsoft considers this build to be sufficiently stable for use by users and has not found any major bugs or show stoppers.