[German]Microsoft has revised and released the hardware requirements for installing Windows 10 May 2019 Update (Version 1903). Now also 32 GByte storage capacity on the system drive are mentioned as a minimum requirement.

Microsoft is getting a bit honest about the hardware requirements. Recently Microsoft seems to have updated the website Windows Processor Requirements, as neowin.net noticed. An entry for Windows 10 May 2019 Update (Version 1903) has been added to the page:

But what about the memory requirements of Windows 10 in the upcoming version 1903? Does anyone remember the information that Windows 10 with 16 GByte storage space can be installed on the system drive? And there were times when Microsoft wanted to compete with Google’s Chromebooks, but comes short, because of the huge resource requirements of Windows 10. The ones who suffered were the users who bought the devices with cheap hardware and then didn’t even get a feature update installed. That failed because of a lack of memory. 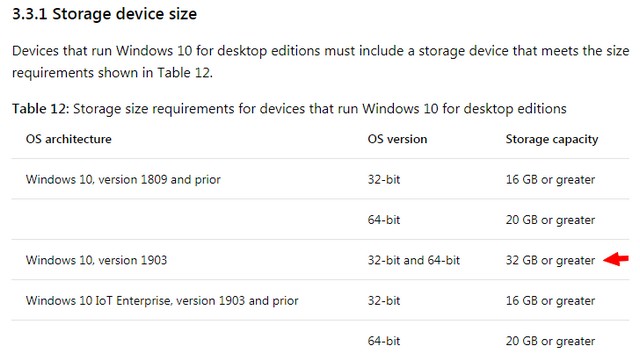 Within this document Microsoft the minimum hardware requirements for Windows 10. Colleagues at deskmodder.de noticed that Microsoft now specifies 32 GBytes or more of minimum memory for Windows 10 V1903 in the Storage device size section. Let me put it this way: Even with this memory size the installation of function updates becomes a cramp. From 128 GByte free memory on a hard disk or SSD you can work and install some software. What’s your experiences there?