Both by mail and in the comments to this article some blog readers informed me about this updates (thanks for that). For my Firefox 66.0.4 portable I clicked Help – About Firefox in the menu and got the update already offered (see following screenshot).

The Release-Notes mentions improvements in the area of web extensions that were disabled.

Further improvements to re-enable web extensions which had been disabled for users with a master password set (Bug 1549249). More support information.

The improvements became necessary because there was an expired certificate on May 4, 2019 that was used to sign add-ons. As a result, digitally signed add-ons refused to work in the browser and were deactivated. New addons could no longer be installed. I had reported in the blog post Firefox: Expired certificate disables addons (May 4, 2019) about this error. In the German blog Fix für Firefox Addon-Problem und ‘Der Download ist fehlgeschlagen’ later I showed how to force the fix to install.

In the comments to this article you can find the hint that Firefox 60.6.3 ESR will be released soon (the release note page doesn’t show anything yet).

Video- and Audio-Auto-Run-Blocker in Firefox 66.0.4

I don’t quite have it on radar what’s new when in Firefox. Blog reader Christoph W. has just sent me a mail about a new feature in Firefox 66.0.4. He wrote:

just found out that FF has added a new feature to the latest version!

There is a new icon in the address bar and there you can allow or block it – or more or less create a white or black list: 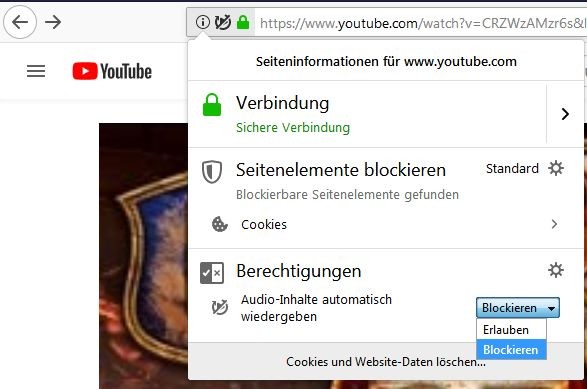