[German]Just a brief information, which I pull out separately again: There are considerable issues caused by update KB4462238 for Microsoft Office 2016, released on May 7, 2019. Microsoft has therefore withdrawn the update and removed it from the Microsoft Update Catalog.

Basically I thought the topic was clear, because as it was covered within my blog post Microsoft Office Updates (Patchday May 7, 2019). I mentioned, that update KB4462238 is causing issues and that it has been withdrawn. I tipped also Woody Leonhard a few days ago, who then published a short article about the buggy and withdrawn update. But after I received mails with hints about of the faulty update, I decided to write this blog post with extracted information.

Update KB4462238 for Microsoft Office 2016 should fix the error that the synchronization of a OneNote 2016 notebook fails and users receive the following error message:

Shortly after the release of update KB4462238 for Microsoft Office 2016, there were users who encountered problems. Microsoft originally wrote:

After this update is installed, clicking a hyperlink in an Office application, such as Word, PowerPoint, Excel, or Outlook, may cause the application to stop working. If you experience this issue, you can uninstall the update by following the instructions in the "More information" section.

When I posted the article Microsoft Office Updates (Patchday May 7, 2019), there was still nothing to read about the withdrawn update. Only the hint about the issues has been released promptly. However, this comment of an anonymous German blog reader reported early, a few hours after initial release, that Microsoft had already withdrawn the update in WSUS.

One day later Microsoft must have pulled the ripcord completely. Because the update has disappeared from the Microsoft Update Catalog and will no longer be delivered via Windows Update. The KB article for update KB4462238 now says This update is no longer available (see following screenshot): 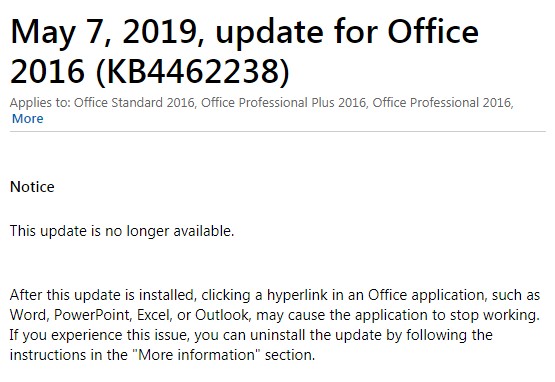 So the update is no longer available, and Microsoft has deleted the previous text except for the above notes. It should be noted that the update was for the .msi-based Office 2016 installations anyway. For the click-to-run versions, updates will be rolled out late anyway.