[German]In a webcast for Windows Insiders Microsoft gave a statement, that the live tiles used in Windows 10 start menu should (still) remain for users and developers. Maybe the plug will pulled later.

There was a rumor in the past that Microsoft will ban the old 'Live Tiles' in the start menu entries of Windows 10. In January 2019 there was an article from Windows Central with a swan song of live tiles, because the functionality had not been updated for ages.

Yesterday evening (CET) there was a webcast for Windows Insider on the Microsoft Mixer channel. Extremely long with 1 hour 48 minutes, where they talked about the new PowerToys etc. You don't have to view this to yourself! It reminds me a bit of a kindergarten where coffee cups and beverage cans are placed next to the notebooks – and of course someone has splilled some water over his keyboard. From timecode 48:00 on, the Microsofters have cleand their desk and the Notbook from the water that someone has poured over his keyboard – these are the real world problems that obviously keep the Windows Insider group busy.

I have embedded the recording of the webcast, which can be accessed by everyone via the Microsoft Mixer page. 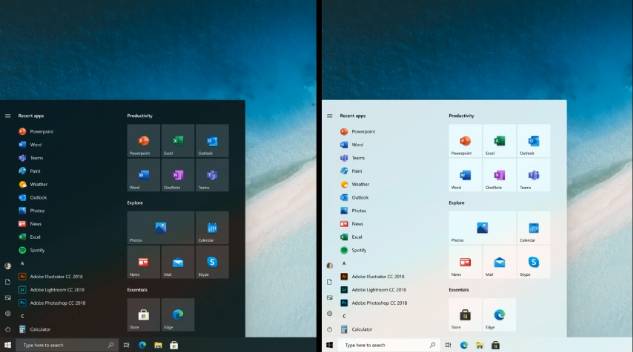 The picture at the top right shows that the "Tile" area of the start menu has been visually redesigned to better integrate with the dark or light mode selected by the user.  This way the Start menu should look consistent with both a dark and a light theme. The new tiles should not only have an icon, but also a background color and rounded corners. Microsoft wants to use colors to highlight the icons in the tiles instead of displaying additional information in the live tiles.

But it's all more or less still an internal experimentation area, where the developers try out what will work. But it becomes visible that Microsoft internally moves away from the live tiles. Because in the new Start menu (in the picture on the top right) a number of icons for Windows 10 applications are shown that no longer contain live tiles. So there is a big visual change compared to the previous Start menu.

The important point: In the webcast, the Windows Design Team makes it clear that live tiles will remain available to developers and users. In other words, developers can continue to provide live tiling for their applications. But my impression is that live tiles die a slow death and are eventually buried. So this is the quintessence of 4.5 years of Windows 10 developent.

I would not have cateched that beef, because I quit the webcast after a few minutes (to time consuming and boring). But someone from Windows Latest has described it here. I came across the information at MSPU. The message I'm extracting now is: At some point Microsoft might tilt the live tiles, but currently the fidgeting tiles continue to live. Do any of you still use the live tiles?