It seems, that Microsoft has established another limit to their free OneDrive cloud storage: Daily limits for the amount of data transfer. If an account reaches a limit, sharing files will be blocked temporarily.

It has been a long – but never ending – story of bad surprises with Microsoft's free cloud storage OneDrive. In the beginning, Microsoft lured users to their free OneDrive account, and each Windows 8/8.1/10 user are getting a free OneDrive storage with the Microsoft account. But we have seen that Microsoft reduced OneDrive's storage limit from 25 GB to 15 GB and then to 5 GB. Users are encouraged to switch over to paid Office 365 to avoid the 5 GByte storage limit and the restrictions mentioned below. 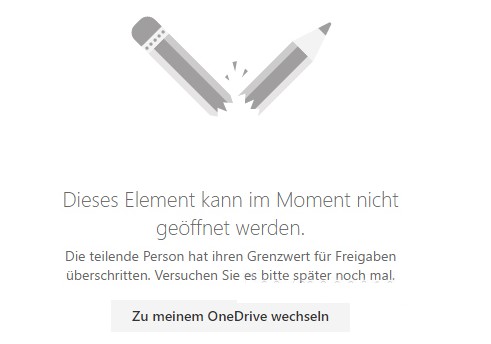 My blogging colleagues at deskmodder.de pointing out, that Microsoft secretly has established another limit. Some users are facing the message shown above during attempting to access shared files. The message says (freely translated):

This Element can't be opened currently

The user, who shared, has exceeded the limit for sharing. Please try later again.

It seems that OneDrive accounts with many shares are monitored about its amount of data transfer. If large files are shared, only a few downloads from other users are exceeding the limit. The folks at deskmodder.de tried to reach out to Microsoft. But the company seems small lipped about the details. They gave just a sample (some kind of an oracle):

If a user shares a  2 GB file, and 10 users are downloading this file, the limit is exceeded earlier than sharing a 1,5 GB file.

So, reading between the lines, it seems that Microsoft has set a data transfer limit to 20 GB per day for free OneDrive accounts. Users are able to use a paid Office 365 OneDrive account and won't see this limitations.

It's nothing wrong with Microsoft's approach to limit the amount of data transfer. They have the right to do that. But it's not a encouraging approach for OneDrive users, not to informing about those limitations. Some users are think it's about "preventing piracy" – but if that's true, why we won't see such a data transfer limit at paid Office 365 OneDrive for Business accounts?

This entry was posted in Cloud and tagged Limit, Microsoft, OneDrive. Bookmark the permalink.