The European Commission has fined Google €2.42 billion for breaching EU antitrust rules. Google has abused its market dominance as a search engine by giving an illegal advantage to another Google product, its comparison shopping service.

Today's Decision concluded that Google is dominant in each national market for general internet search throughout the European Economic Area (EEA), i.e. in all 31 EEA countries. The Commission investigated Google's market position in general internet search since 2008, and the Decision found Google to be dominant in each country since 2008, except in the Czech Republic where the Decision found Google to have been dominant since 2011. This assessment is based on the fact that Google's search engine has held very high market shares in all EEA countries, exceeding 90% in most. It has done so consistently since at least 2008, which is the period investigated by the Commission. 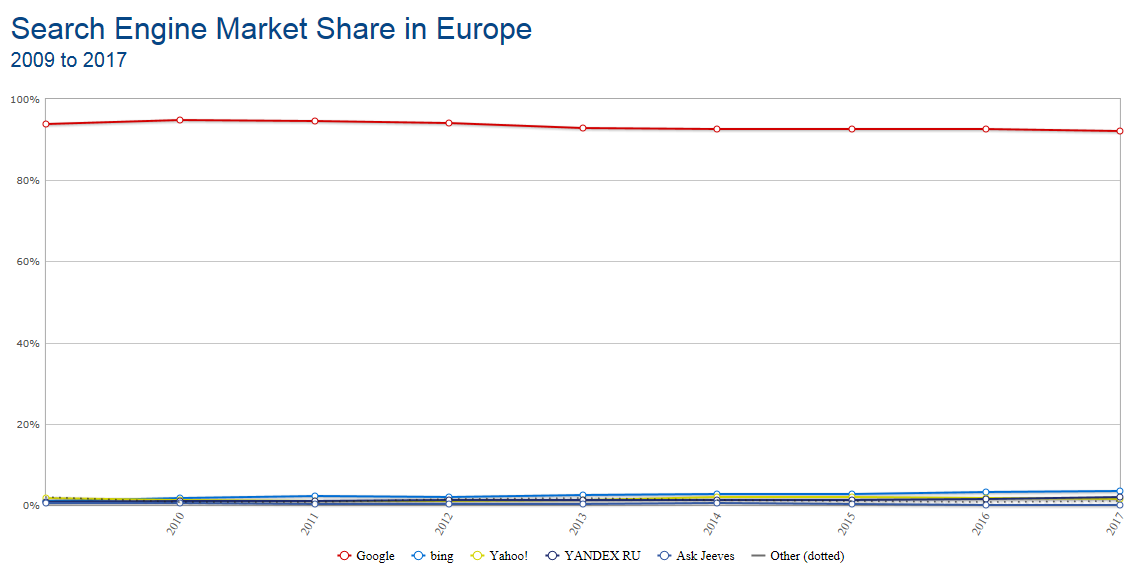 Market dominance is, as such, not illegal under EU antitrust rules. However, dominant companies have a special responsibility not to abuse their powerful market position by restricting competition, either in the market where they are dominant or in separate markets. Otherwise, there would be a risk that a company once dominant in one market (even if this resulted from competition on the merits) would be able to use this market power to cement/further expand its dominance, or leverage it into separate markets.

The Commission Decision does not object to the design of Google's generic search algorithms or to demotions as such, nor to the way that Google displays or organises its search results pages (e.g. the display of a box with comparison shopping results displayed prominently in a rich, attractive format). It objects to the fact that Google has leveraged its market dominance in general internet search into a separate market, comparison shopping. Google abused its market dominance as a search engine to promote its own comparison shopping service in search results, whilst demoting those of rivals. This is not competition on the merits and is illegal under EU antitrust rules.

These cover all countries in the EEA in which Google currently offers its comparison shopping service.

This shows the impact of Google's practices both on traffic to its own comparison shopping service and to rival websites. The Commission has observed similar trends also in those countries in which the illegal practices have been implemented more recently. Its findings are further corroborated by additional information set out in the Commission Decision. This cannot be published at present without the consent of Google and other third parties, because it may contain business sensitive information.

As a result of Google's illegal practices and the distortions to competition, Google's comparison shopping service has made significant market share gains at the expense of rivals. This has deprived European consumers of the benefits of competition on the merits, namely genuine choice and innovation.

The Commission's fine of €2 424 495 000 takes account of the duration and gravity of the infringement. In accordance with the Commission's 2006 Guidelines on fines (see press release and MEMO), the fine has been calculated on the basis of the value of Google's revenue from its comparison shopping service in the 13 EEA countries concerned.

Under the Decision, Google must stop its illegal practices concerning its own comparison shopping service within 90 days, and refrain from any measure that has the same or an equivalent object or effect.

It is Google's sole responsibility to ensure compliance and it is for Google to explain how it intends to do so. Regardless of which option Google chooses, the Commission will monitor Google's compliance closely and Google is under an obligation to keep the Commission informed of its actions (initially within 60 days of the Decision, followed by periodic reports).

Non-compliance would be the subject of a separate case where Google would have the opportunity to comment. If the Commission were to decide that Google had failed to comply with its obligations under the decision, it would be subject to a daily penalty payment of up to 5% of the average daily worldwide turnover of Alphabet, Google's parent, with any payment backdated to when the non-compliance started.

The Commission opened proceedings in this case in November 2010. This followed a number of complaints by European and US competitors that Google had breached EU antitrust rules. After an initial investigation, Google sought to address the Commission's concerns by offering legally binding commitments. Google proposed three sets of commitments (the third was submitted in February 2014). However, the feedback the Commission received from third parties showed that they were not effective to address the Commission's competition concerns in full. Google did not submit a revised proposal.

The case therefore has a specific history. Since various attempts to reach a conclusion by means of commitments failed, from November 2014, the Commission services started to update the information in the files. This led to two Statements of Objections, in April 2015 and July 2016, setting out the Commission's preliminary conclusions and a range of additional evidence.

Google's rights of defence were respected throughout the Commission's investigation – it was granted the opportunity to respond to both Statements of Objections on the basis of full access to the non-confidential Commission file as well as access to a range of confidential business and traffic data that was granted to Google's advisors in so-called "data rooms". Google also had the right to an oral hearing before the Commission services and the competition authorities of the Member States after each Statement of Objections, which it chose not to exercise.

The Commission has already come to the preliminary conclusion that Google has abused a dominant position in two other cases, which are still being investigated. These concern:

1)   the Android operating system, where the Commission is concerned that Google has stifled choice and innovation in a range of mobile apps and services by pursuing an overall strategy on mobile devices to protect and expand its dominant position in general internet search; and

2)   AdSense, where the Commission is concerned that Google has reduced choice by preventing third-party websites from sourcing search ads from Google's competitors.

The Commission also continues to examine Google's treatment in its search results of other specialised Google search services. Today's Decision is a precedent which establishes the framework for the assessment of the legality of this type of conduct. At the same time, it does not replace the need for a case-specific analysis to account for the specific characteristics of each market.

Google Europe has posted a blog article titled The European Commission decision on online shopping: the other side of the story where the company outlines their position.

When you shop online, you want to find the products you're looking for quickly and easily. And advertisers want to promote those same products. That's why Google shows shopping ads, connecting our users with thousands of advertisers, large and small, in ways that are useful for both.

We believe the European Commission's online shopping decision underestimates the value of those kinds of fast and easy connections. While some comparison shopping sites naturally want Google to show them more prominently, our data show that people usually prefer links that take them directly to the products they want, not to websites where they have to repeat their searches.

We think our current shopping results are useful and are a much-improved version of the text-only ads we showed a decade ago. Showing ads that include pictures, ratings, and prices benefits us, our advertisers, and most of all, our users. And we show them only when your feedback tells us they are relevant. Thousands of European merchants use these ads to compete with larger companies like Amazon and eBay.

When the Commission asks why some comparison websites have not done as well as others, we think it should consider the many sites that have grown in this period–including platforms like Amazon and eBay. With its comparison tools, reviews, millions of retailers, and vast range of products from sneakers to groceries, Amazon is a formidable competitor and has become the first port of call for product searches.  And as Amazon has grown, it's natural that some comparison services have proven less popular than others. We compete with Amazon and other sites for shopping-related searches by showing ever more useful product information.

When you use Google to search for products, we try to give you what you're looking for. Our ability to do that well isn't favoring ourselves, or any particular site or seller–it's the result of hard work and constant innovation, based on user feedback.

Given the evidence, we respectfully disagree with the conclusions announced today. We will review the Commission's decision in detail as we consider an appeal, and we look forward to continuing to make our case.

This entry was posted in Allgemein and tagged EU Commission, fine, Google. Bookmark the permalink.