[German]Just a brief not to users/admins, who are suffering from .NET-Framework installation error 0x80092004. Microsoft released Update KB4340558 for .NET Framework on July 19, 2018 via Microsoft Update Catalog.

Several attempts to fix that issue

Subsequently, update KB4340558 was offered again in the Microsoft Update Catalog with the modification date July 16, 2018. Whether something was changed within the package itself or only the metafiles, I could not determine. Today, German blog reader TomParis1975 (thx) posted a comment, mentions, that update KB4340558 has been re-released on July 19, 2018 in Microsoft Update Catalog. Tom wrote:

There is a working official MS solution since last night:

I’m glad I didn’t rush into anything yesterday. I was already removing one of the updates as recommended
– 2018-06 Preview of Quality Rollup for.NET Framework … (KB4291497)
which was recommended by some people (thanks to everyone!), but was installed on my system according to WinUpd, but not listed in “programs / installed updates” and not available according to “wusa / uninstall ” (super..)
– or 2018-07 security update only for.NET Framework … for Windows 8.1 and Server 2012 R2 for x64 (KB4340006) (that seemed right to me, but I wasn’t sure) 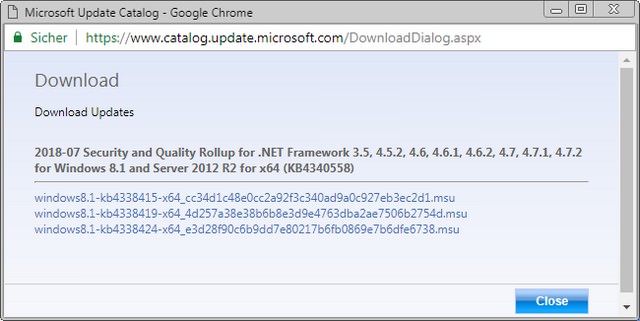 At this point, I would like to ask those affected who have not been helped by previous workarounds and revisions: Will the installation of Update KB4340558 work if the three individual packages in question are newly downloaded from the Microsoft Update Catalog?

This entry was posted in Update and tagged KB4340558, Update. Bookmark the permalink.