[German]What about the performance of new versions of Microsoft Office? Every new version has a bigger foot print and feels more sluggish. I have just seen an interesting evaluation of VMware for Office in virtual desktop infrastructure (VDI) environments that confirms this impression and I would like to share it with you.

Microsoft is pushing the user base to Microsoft Office 365 and is modernizing this product on a monthly basis all over the place. But the many innovations in the last Office versions have their (performance) price. Not everything is better, and anyone who virtualizes Office in a VDI environment should know the characteristics.

Benchmarking Office in a VDI environment under vSPhere

This is because Microsoft Office is a frequently installed productivity suite in the virtual desktop infrastructure (VDI) environment. Over the years, several Office updates are released, and organizations select Office versions based on their functionality and performance requirements. For a benchmark, you can take a look at previously released Office versions, in a VDI environment, and draw conclusions about Office 365.

The folks at VMware have done just that and compared Office versions 2013, 2016 and 2019 in terms of resource hunger in virtual machines (VDI environment on vSphere) in a benchmark. For the test, the testers used VMware View Planner to compare the performance and scalability limitations of a VDI environment with users running Office 13, Office 16 and Office 19. I came across the report here with the results via the following tweet. 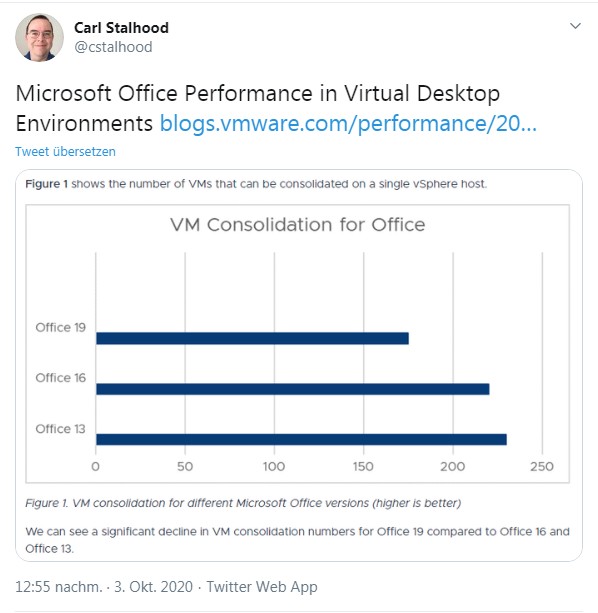 In the tests, the VMware people used a two-socket node with the following configuration:

In addition, the tester configured a VM with the following specs:

The testers also optimized a base VM with the VMware OS Optimization Tool and created instant clones using the VMware Horizon pool.

Description of the test

To measure the impact of different versions of Office on performance, VMware people conducted some experiments with VMware View Planner and compared the following parameters for each version of Office:

The tests used the View Planner Standard profile, which includes Microsoft Office workloads such as Excel, Outlook, Word and PowerPoint, and other commonly used applications such as Google Chrome and Adobe Acrobat Reader.

The main result of these tests was already evident in the graph from the above tweet: we can see a significant decrease in the VM consolidation numbers of Microsoft Office 19 compared to Office 16 and Office 13. You can read the details in this article (has been deleted)- perhaps quite interesting if someone has to deal with VDI environments.