[German]Frequent users of Microsoft Office 2021 and Office 365 have probably already noticed this. The AutoSave function now only saves files from Word, Excel and PowerPoint in the cloud (on OneDrive or SharePoint). A local storage is probably no longer supported.

AutoSave only in the cloud?

I confess I wasn't really aware of it, as I've opted out of Office as an author with Microsoft Office 2019 – as a user, I use older versions of Word, for what little manuscript editing I still need to do. So a Facebook post in an MVP group immediately jumped out at me. 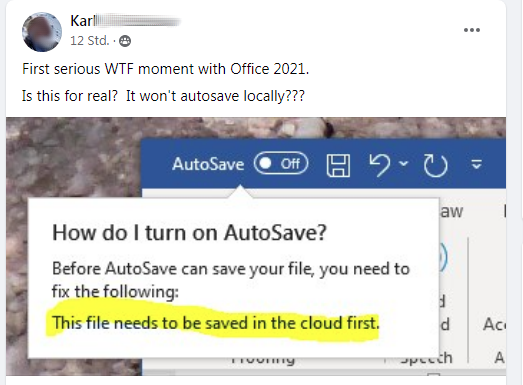 AutoSave cyclically save the currently edited documents, in order to be able to fall back on the previous backup in case of a crash. Now, the person in question saw the AutoSave option in Office 2021 and got the indication that this feature can only save files to the cloud. Before the option can be turned on, there must be a connection to the cloud.

Microsoft has published the article What is AutoSave? for Office 365 on the topic, explaining that AutoSave is a new feature available in Excel, Word and PowerPoint for Microsoft 365 subscribers. The file the user is working on is then saved every few seconds. The article also includes a FAQ on the topic.

AutoSave is enabled by default in Microsoft 365 when a file is stored on OneDrive, OneDrive for Business or in SharePoint Online. In addition, there is an article How do I turn on AutoSave? from Microsoft that explains how to turn on AutoSave. However, what doesn't seem to work is that this AutoSave is storing locally on the client – at least I didn't find anything in a hurry.

But the feature still seems to lead to discussions – on reddit.com there is this discussion startet 3 months ago. There someone wants to remove this option completely, because he backs up to a "different cloud", away from Microsoft. The approaches described there to remove the option don't seem to work in newer Office builds.