[German]Amazing results recently revealed by a performance comparison between Microsoft's Windows 11 and an Ubuntu 22.04 LTS Linux on an 8-core Ryzen 5800X3D processor from AMD. The benchmarks were run by Phoronix with various workloads, using fresh installations of the operating systems. Ubuntu 22.04 LTS clearly outperforms Microsoft Windows 11 in the benchmarks. The tests show that Microsoft still has deficits in running its operating systems on the AMD platform.

According to this Phoronix article from September 8, 2022, the AMD Ryzen 7 5800X3D was run with the ASUS ROG CROSSHAIR VIII HERO motherboard, 2 x 16GB DDR4-3600 memory and a 500GB WD_BLACK SN850 SSD. Clean installations of Windows 11 and Ubuntu 22.04 LTS were performed on this system for comparison. Then, a variety of benchmarks were run for workloads that natively support both Windows and Linux. The results of these benchmarks (see the following screenshot) are downright frightening for Windows 11.

The tester writes that with the exception of some OpenJDK Java benchmarks that ran well on the 5800X3D under Windows and some LuxCoreRender tests, Ubuntu Linux performed much better across the board on the AMD Ryzen 7 5800X3D system. The screenshot above shows that individual benchmarks give gigantic performance advantages for Linux. With Blender and other renderer benchmarks like Indigo, OSPray and some LuxCoreRender tests up to JPEG-XL image encoding, AVIF image encoding, AV1 video encoding and much more, Ubuntu Linux consistently delivered much better performance on this AMD Ryzen 7 5800X3D desktop, the article states. 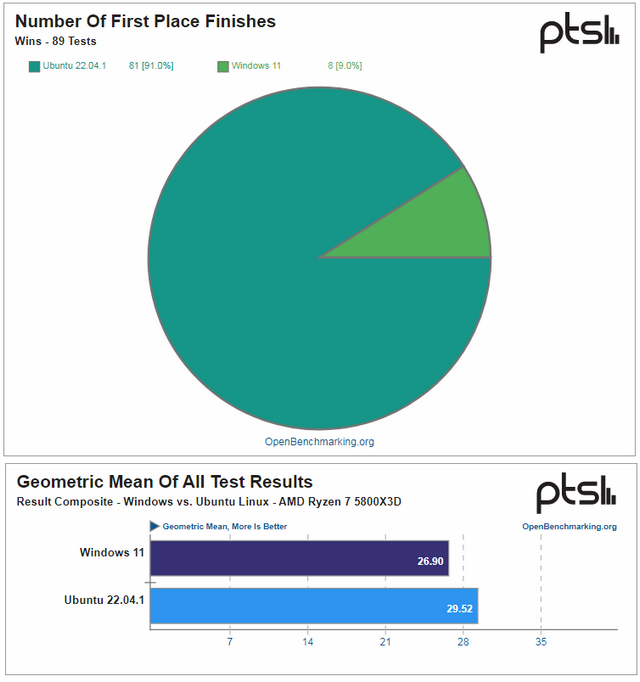 The screenshots above from the Phoronix article show that Linux won the majority of the 89 benchmarks. In the evaluation, Linux gets the score of 29.52 compared to 26.90 for Windows 11. All results can be found on this benchmark page. The results do not necessarily speak for using Windows 11 on AMD CPUs. (via)

This entry was posted in Linux and tagged Ubuntu, Windows 11. Bookmark the permalink.