AnyDesk is a remote access software developed by the company AnyDesk Software GmbH in Stuttgart. AnyDesk allows remote access between computers with different operating systems like Windows, Linux or macOS. AnyDesk Software GmbH is a spin-off of four former TeamViewer employees. The remote maintenance software is mentioned more often in the blog readership as an alternative to TeamViewer.

German blog reader Christian K. informed me yesterday by e-mail that AnyDesk has massively increased the prices for licenses of its remote maintenance software (thanks for the tip). I'm not that knowledgeable about AnyDesk or remote maintenance software license prices, but Christian thinks that they would align with TeamViewer. In October 2022, the following monthly subscription prices were in effect (source): 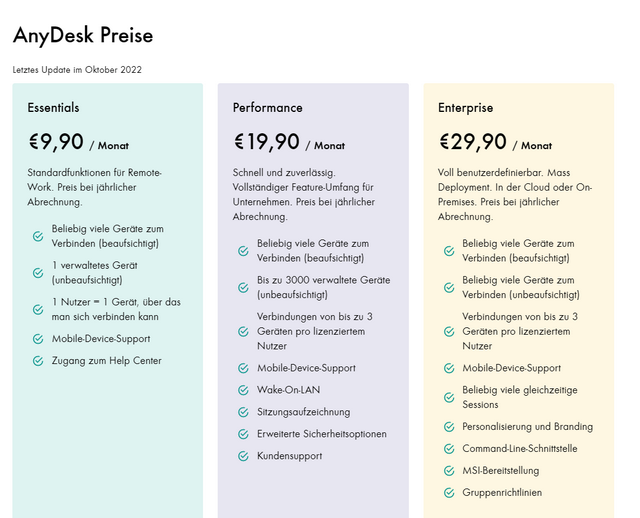 The AnyDesk order site shows now the following price and license conditions. It is noticeable that not only the prices have increased, but also the names of the packages and the license conditions have changed. And that can get really expensive. 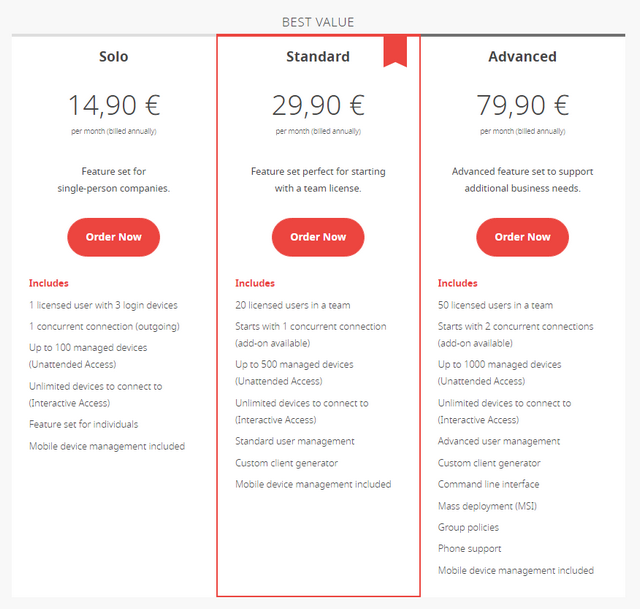 Because it looks to me like the limits per license model has been strengthen also. For the single license for self-employed and individuals, only one person (with three end devices) and one simultaneous connection is allowed. Christian wrote in his mail:

For many solo self-employed and technicians like me, an edition is interesting here that allows at least 3 simultaneous connections, because one connection at the same time is regularly not enough if you want to access a client as well as the server at the same time in a company, for example. This edition used to cost 20 € per month at Anydesk (Teamviewer charged about 120 € per month for it), which was an acceptable price from my point of view.

Now the prices have been raised by 50 – 100%, but of all things this important feature has been additionally cut and moved to a higher-quality edition. The smallest edition with this feature (2 simultaneous connections) now costs 80 € per month.

Also the number of unattended clients (fixed password has been stored) has been cut significantly and is now 500 clients instead of 3000 clients.

As a solo self-employed person, you probably won't reach this limit very quickly, but the question is how reliably old clients that were exchanged as part of a hardware upgrade will fall out here. One will hardly go and (want to) manually remove clients in an Anydesk list, but reset the counter on the part of Anydesk, if the client was not in use for X months.

From this point of view, Chistian draws the conclusion: Anydesk is therefore dead for me as soon as the price increase also arrives at existing customers, and that is probably not very far in the future. In a supplementary mail he then wrote an addendum:

You can already increase the number of simultaneous outgoing connections in the edition [Standard license], which now costs 30 € [see screenshot above], but you will pay the full monthly fee per outgoing simultaneous connection.

So to turn the previous Performance Edition (3 connections, 20 € / month) into a Standard Edition, at least in terms of outgoing connections, 90 € per month will be due. However, the trimming of e.g. managed devices (unattended remote access) remains.

Christian notes that this is a price increase by a factor of 4.5. Not bad, considering that the services will be cut anyway. On the question of why the prices were raised so much, he has a theory. At the end of 2021, venture capitalists pumped 60 million euros of investment into AnyDesk GmbH (see this German article). So it's not unreasonable to think that an order came from this direction to align prices with TeamViewer licenses. Any of you affected? How do you assess the situation? I don't have any idea what is common and acceptable.

This entry was posted in Allgemein. Bookmark the permalink.