A closer look at Windows 10 Cloud

[German]Microsoft is developing internally a new Windows 10 SKU, named “Windows 10 Cloud”. I was able to get my hands on an early version of this SKU and played a bit around. Here are my first impressions and some more details.

A few days ago we heard the first time about “Windows 10 Cloud” from Brad Sams at petri.com. Later on Mary Foley reported on ZDNet.com a few more details – Windows Cloud will be a Windows 10 platform designed to run only Unified Windows Platform (UWP) apps installed from the Windows Store.

Hands on to an early Windows 10 Cloud build

I have had the opportunity to get my fingers to a Windows 10 Cloud SKU (like WindowsBlogItalia or my German blogging colleagues at deskmodder.de). The SKU I tested, reports as “Windows 10 Pro”, but it’s internally Windows 10 Cloud (64 bit version). 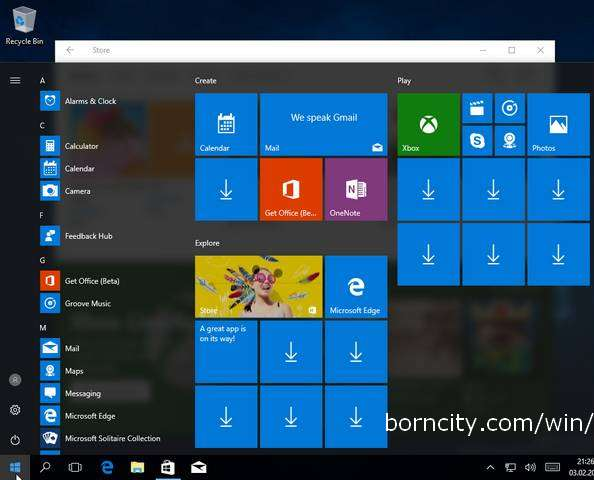 During setup Cortana guides the user thru the settings, also allowing to set up quick settings. Then, after setup, a ordinary Windows 10 desktop will be shown. After installing, most tiles are showing an (download) arrow, because Windows Cloud is downloading the apps from Windows store.

The screenshot above shows the download page from Windows store. Some downloads of preinstalled apps are pending – and I’ve had selected VLC for download. A freshly installed systems comes with desktop apps like Notepad, WordPad, Paint, Explorer and also Internet Explorer.

Although Registry editor regedit.exe was shipped within Windows folder, I wasn’t able to run this program. Windows Cloud reported, that the program wasn’t designed for this platform.

Windows Cloud comes also with many well known apps from Windows 10, like Photos, Mail, Edge, Camera, Store, Maps, some apps to access Facebook, Twitter and other social networks. There is also a OneNote tile and a tile Get Office (Beta) – but I wasn’t able to launch the Get Office (Beta). I got a message, that the app can’t launch and I have to look into Store to get more details about Office Beta.

I also received many notifications about an app caused problems with the default app settings as show above. Downloading Google Chrome installer in Internet Explorer triggered the recently announced Windows Defender Security Center.

My attempt, to execute Google Chrome portable, already downloaded in Edge browser was blocked with the dialog box shown below.

Windows Cloud is blocking Win32 (desktop) apps, although the OS runs on a x86 machine and some Win32 apps (like WordPad) are shipped and are executable. Blocking third party Win32 (desktop) apps has something to do with Microsoft’s device protection mechanism, preventing such a system from malware infection. 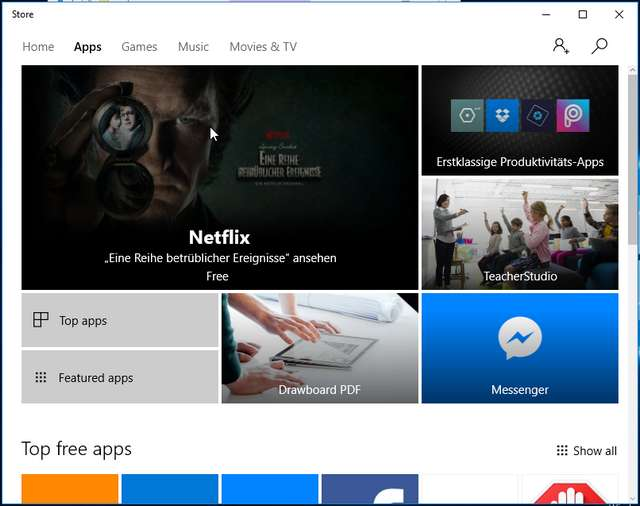 But it’s possible to launch the store and download and install UWP apps (Universal Windows Platform). The preinstalled tiles (Photo, Camera, People, News, Maps etc.) in start menu are populated after installation with such UWP apps from store. 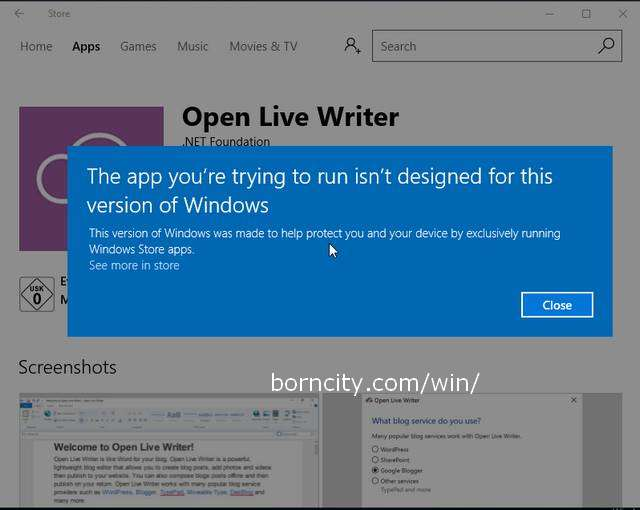 My idea was to run Win32 apps converted as Centennial apps from store. Open Live Writer was one of those apps. But Windows Cloud blocked this app (see screenshot above) with a (misleading) message, that ‘This version of Windows was made to help protect you and your device by exclusively running Windows Store apps.’

The build I used, was an early version of Windows 10 Cloud – but it shows, where Microsoft is aiming to. It will be a kind of Windows RT 10 – clearly implementing the GUI from Windows 10, but bee restricted to Windows Store UWP apps and desktop apps from Microsoft. Windows 10 Cloud currently runs on x86 CPUs, but I guess we will see a version for ARM.

As others pointed out, Windows Cloud addresses low cost systems and probably will be Microsoft’s answer to Google’s Chromebook with Chrome OS. But I’m not sure, whether we will see such a system in US or Europe – maybe it’s a device concept for emerging market. But on the other side, Microsoft just introduced Intune for Education – and we have had Windows 8.1 w Bing. Let’s wait till Microsoft is announcing Windows 10 Cloud.

What is causing some headache for me, is the Windows 10 / Windows Cloud fingerprint, compared with Chrome OS. Here is what the 64 bit alpha of Windows Cloud eats on disk space. 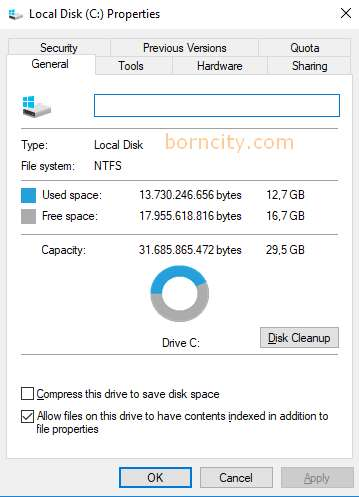 The question is: Why should I buy a cheap system with a restricted Windows 10 Cloud OS, instead of a system with Windows 10 that is able to run also Win32 desktop apps? The “improved security” is just an eye candy (in my view), because defender and smart screen filter also protects Windows 10 systems (according to Microsoft, Windows 10 is the most secure Windows ever). The history of Windows RT shows that people don’t like restricted editions of a product, if they can have a fully functional edition. And if a user decided to buy a cheap system, why not using a Chromebook with Chrome OS. There are a ton of apps and Chrome OS comes with a much smaller foot print. But to be fair: We are now in an early state of Windows Cloud OS and have to wait, until Microsoft official announcing this SKU.

Side note: An early build of Windows 10 Cloud was leaked by @adguard, but I don’t recommend to install it on your machine. Addendum: Also folks at MSPowerUsers has written some words about that build.

This entry was posted in Windows and tagged Windows 10 Cloud, Windows Cloud. Bookmark the permalink.

2 Responses to A closer look at Windows 10 Cloud