[German edition]Microsoft has released Update KB3024777 for Windows 7 Service Pack 1 and Windows Server 2008 R2 SP1, which fix an issue with KB 3004394. Here a few further details about this Update, that has been an object for further speculations within several sites.

Hell, Microsoft was fast! After December Patch day (12/19/2014) with KB 3004394 update disaster (see my articles Update KB3004394 breaks Root Certificate in Windows 7/ Windows Server 2008 R2 and Patchday: Windows Update error 800706F7) Microsoft finally has withdrawn this patch. Too many "collateral damages" has been observed (Windows Update has been broken, Defender doesn't work anymore, Narrator and other assistive tools refuses to work and so on). My suggestion was to uninstall KB 3004394 (December-Update for das Windows Root-Certifikate) on Windows 7 and Windows Server 2008 R2.

After login to my Windows 7 machine, I noticed this morning an Update KB3024777, just 29 KByte in size. So I decided to let it install and begun to do a Web search … 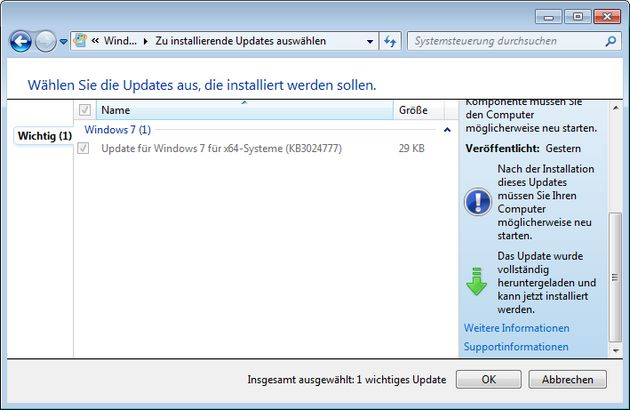 Well, I had pretty much time for my investigations, because installing Update KB3024777 required a reboot. And then I observed heavy Registry update activities along with heavy hard disc activities. Just before I accepted Update installation, I've tried to launch Narrator (this tool should also be affected by KB 3004394). Narrator doesn't show up – until 5 minutes after Update install boot. Strange things must be happened.

Browsing the web for KB3024777 reveals articles like this or this, written a couple of hours before and speculating about a new Windows 7 update an it's purpose. Now Microsoft's support article for Update KB3024777 is online. It says:

The KB 3004394 update that was dated December 10, 2014 can cause additional problems on computers that are running Windows 7 Service Pack 1 (SP1) and Windows Server 2008 R2 SP1. This includes the inability to install future updates. This new update is available to remove KB 3004394 from your computer.
For more information about the KB 3004394 update, see the following Microsoft Knowledge Base article:

BTW: This update won't be listed in "installed update", because it does it's job an vanishing from your machine. Because? There is no need, to uninstall this update after "installing"

Or in other words: