[German]Some Nexus 4 users are facing some "freezing" problems, so alarms are not reliable. After stumbling upon this issue in Google+ I was investigating it a bit. Here is, what I found so far, searching the web.

A few days ago, I published this German Lollipop-Update auf 5.0.1 für Nexus 4/7 (2013) verfügbar article, announcing an OTA update for Android 5.0.1 for Nexus devices. My Nexus 4 and Nexus 7 (2013) already received this update. But I don't use both devices on a daily base – so I haven't faced "freezing issues". I'm only annoyed by one issue since updating to Android 4.3: The Google App My Tracks doesn't works reliable. Some time, GPS tracking won't start, and in other cases tracking stalls during a walk. Therefore I don't use My Tracks very often anymore.

Today I was stumbling uppon this German Google+ entry. A user was reporting "freezes" on his Nexus 4 under Android 5.0.1. He was forced to press the On button for 20 seconds to reset the device. The Google+ thread shows other users reporting the same problem. So I begun to investigat this issue and tried searching the web.

The first hit was this reddit thread, where many users are complaining about a "freeze" issue on Nexus 4. User ignitusmaximus wrote on reddit about this issue:

Called "Sleep of Death". It doesn't actually shut off, just doesn't wake up from sleep. I find this many times happening where I can't wake the device but the notification light is still giving me alerts on my notifications.

Unfortunately Nexus 4s are notorious for this, and its a hardware issue that can't be fixed.

The best advice I can give at this point, is if you rely on an alarm clock, use daydream while you charge. That way the phone isn't in sleep mode during the night, and you can sleep safe knowing your alarm is going to wake you up.

I don't know, whether this statement is reliable or not. Others are claiming "freezes" are caused by battery load (if battery load is below 40 %, it comes to freezes). The screenshot below indicates, that this isn't true, because there are freezes at distinct battery charging levels. 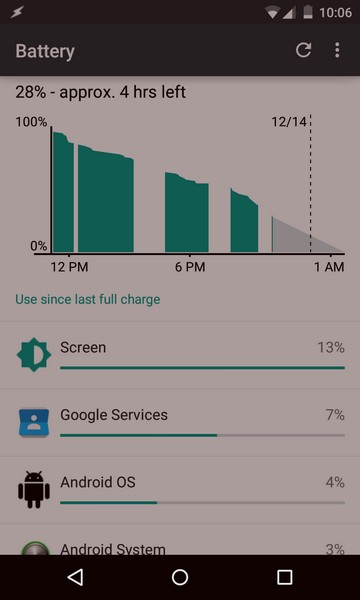 Some users in older posts addressed the hope, that this issue will be gone with Android 5.0.1 (which shall fix several bugs). But this discussion thread at google deals also with Nexus 4 "freezing" problems – but last posts confirming, that the issue is still there under Android 5.0.1. Some people also have had this effect under KitKat, but it seems it occurs in Lollipop more often. Here is also a similar Reddit discussion, where one user is claiming, that flashing a factory image of Android 5.0.1 solved the issue so far. But I'm not sure, whether this will heal the freezes.

The issue has been also in older Android versions, as you can see in this 2013 post. Are there any other findings, to fix this issue? Comments and further suggestions are welcome. Maybe we will get a better image, what happens.

This entry was posted in Android and tagged "Sleep of Death", Android 5.0.1, freezes, Nexus 4. Bookmark the permalink.