Is Windows 10 stalling with error 0x8007001F during installing Anniversary Update? Or is this error code thrown during an upgrade from Windows 7/8.1 to Windows 10? Here are a few hints, what could be the root cause for this error.

I never have had this error code, but I was facing several MS Answers forum posts from users, ending with error 0x8007001F thrown from Windows Update during installing Windows 10 as an upgrade. Here is a German error dialog reported during upgrade.

This error code has also been thrown during feature upgrades (for instance installing Windows 10 . Anniversary Update).

Unfortunately the HRESULT error code 0x8007001F isn't documented within this document. But we can use my blog post How to decode Windows errors? to decode 0x8007 as a Windows raw error. The code 0001F (according to this web site) stands for ERROR_GEN_FAILURE and the error text is A device attached to the system is not functioning.

Within this forum thread (German), third party antivirus scanners are mentioned as root cause for this error. The filter driver installed from those tools blocks access to Windows file system. 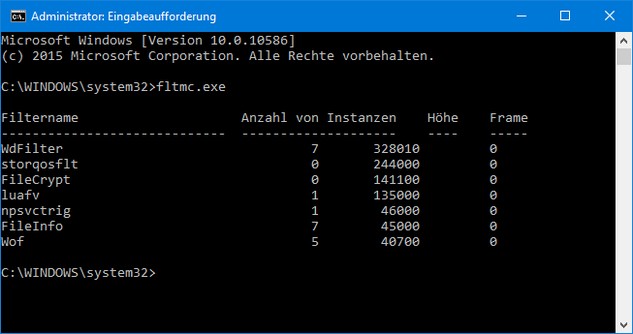 Tip: You can use the command fltmc filters discussed within my blog post Windows 10: Error 0x80070057 from Cloudfogger, to check, whether third party filter drivers are installed on a machine.

Within this Microsoft Answers forum thread (and here in German) users are reporting, that a parallel Linux installation with GRUB boot loader was the show stopper. The fix was to restore the master boot record (MBR) in Windows PE, using the command:

This writes a new Windows boot loader. Afterward, the user was able to update Windows 10. This brings me to the idea, if you used Acronis True Image, also an exchanged boot loader can be the case for install issues.

Moving user profiles to another logical drive / partition is also a killer and show stopper for upgrade installations. A user posted such a hint within this forum thred. If you moved the user folders, move the folders back to the Windows partition.

If you are not successful with the checks given above, grab an install image (Windows 10-ISO install media created via Media Creation Tool), boot your machine with this media and re-install Windows 10 again.