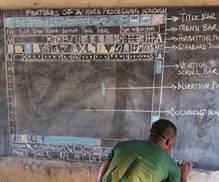 [German]It's one of the stories that life writes like this, and last week on the internet went viral. A photo of a teacher who drew a blackboard with chalk on the screen of Word in his computer science class appeared on Facebook. He obviously taught his Word course with it, and the students don't have a PC either. Now Microsoft has promised to donate the man a PC. Here are a few details about that story.

In Africa many things are different: There is no fast Internet, but there are creative solutions. Africans implements payment options via mobile phone, there are new Internet services with slow Internet and more. So completely different from what the guys and girls from the US-West Coast intends to teach the world as urgent. Companies such as Facebook (see my post Cool: Cool: Facebook führt für Angestellte den 2G-Dienstag ein) or Google (Android Go) are reflecting this trend.

Word ICT-Course with chalk on blackboard

A teacher in Ghana came up with one of these creative solutions. Because there apparently PCs are scarce – or rather' not available' – and there is no beamer or whiteboard, he uses a blackboard and a pen (made of chalk). For his Word course, he drew the screen of the text program on the blackboard. I lost the spit when I saw the photo this week. 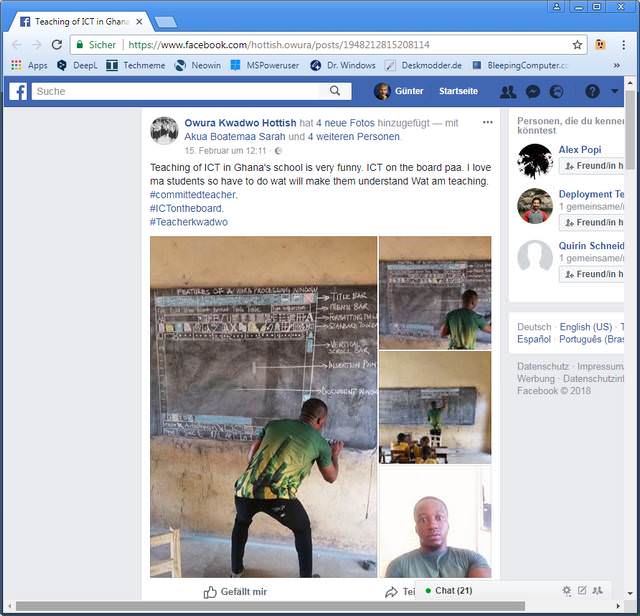 The teacher is Owura Kwadwo Hottish, wo posted the above images. He writes that teaching ICT (Information and Communication Technology) in Ghana is a challenge. So he has thrown a copy of what he is talking about on the blackboard. The true meaning becomes clear when you enlarge the photo above. This French-language article (deleted) has some more information.

That's just wow, isn't it? The boy drew a word screenshot. Note, that the toolbar and the format bar are swapped in the position – but otherwise the teacher did a great job.

Note: The whole thing is probably running as a dry run – it is something like a village school (farm school) where there is electricity but no computers. Also the students probably don't have something like that, but at least they should learn the basics for working with Word.

Oh yes, I forgot, the older ones among the blog readers still have a look for that. There is no Ribbon, but a menu bar. In Africa, they still appreciate the value of good software running on older hardware, without frills, in Africa.

Rebecca Enonchong asked in the tweet below who the teacher was. The feedback came quickly that it was Owura Kwadwo from Kumasi in Ghana.

Supporting teachers to enable digital transformation in education is at the core of what we do. We will equip Owura Kwadwo with a device from one of our partners, and access to our MCE program & free professional development resources on https://t.co/dJ6loRUOdg

And at some point @MicrosoftAfrica got in touch. Owura Kwadwo gets a PC sponsored by one of the Microsoft partners. Of course, it's not a computer with Windows 7 and Word 2003, but probably something in combination with Windows 10 and Office 365, which will probably be even less useful for the teacher and his students, as the kids probably don't get their hands on such hardware.

This entry was posted in Allgemein and tagged general. Bookmark the permalink.