[German]Microsoft Microsoft seems to have re-released old update KB4023057 for Windows 10 (for versions 1507 to 1703) and/or released it with a new description.

It almost slipped through my mind – but Woody Leonhard keeps a revision list for KB descriptions including changes. And one of its readers (@MrBrian) noticed the change.

Only certain builds of Windows 10 versions 1507, 1511, 1607, and 1703 require this update. For devices running these builds, the required update is automatically downloaded and installed through Windows Update.

This update is also offered directly to the Windows Update Client for some devices that do not have the latest updates installed. This update is not offered in the Microsoft Update Catalog. The update replaces update 4022868.

The nasty details in background

The current kb article list the files altered by this update. Here is a screenshot of the files updated from the re-released package 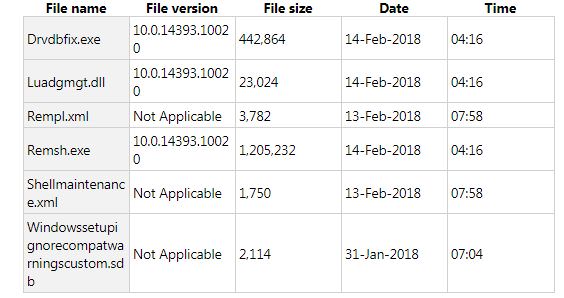 Microsoft hasn't documented the purpose and meaning of these files. However, I've uncovered a few details within my blog post Windows 10 reliability update KB4023057 (02/08/2018). There you can read about hooks and cliffs, e. g. what the file Remsh.exe does. I've described the purpose of some files in the best possible way. For the new file luadgmgt.dll I found only a hint on the internet that it belongs to the Microsoft Windows Vista Promotional Pack, which I hardly can believe. Addendum: The DLL is part of a Windows Compatibility pack – I guess for the Lumia smartphones.

I found also this article from Michael Horowitz, published in January 2018. Michael described a similar experience – and in January 2018 we've had a forced Windows 10 upgrade already. Within this mydigitallife.com forum entry update KB4023057 is claimed also as responsible for the forced Windows 10 upgrade to newer builds. There a Windows10UpgraderApp.exe is mentioned to manage the upgrade. And it seems that update KB4023057 creates tasks in task scheduler under:

These entries are responsible to bypassing Windows Update and force an upgrade to the most recent build.

Microsoft admits in a note in kb article 4023814, that the force upgrade happens due to a bug (Susan Bradley cateched it here):

Microsoft is aware that this notification was incorrectly delivered to some Windows 10 Version 1703 devices that had a user-defined feature update deferral period configured. Microsoft mitigated this issue on March 8, 2018.

Users who were affected by this issue and who upgraded to Windows 10 Version 1709 can revert to an earlier version within 10 days of the upgrade. To do this, open Settings > Update & Security > Recovery, and then select Get started under Go back to the previous version of windows 10.

If I interpreting the text above in a proper manner, Microsoft tried to mitigate this bug with update KB4092077, dated March 2018. My conclusion: We need a new name for that thing – my proposal 'Windows 10 as a surprise'.