[German]Another weekend topic, especially for administrators in the business environment. It came to my attention a few days ago. Microsoft will discontinue the Delta updates for Windows 10 in favor of the Express updates available on WSUS & Co.

If I remember correctly, I stumbled across the topic via the Twitter channel of @MSWindowsITPro (but there were some tweets that specifically drew my attention to it). Here is the relevant Tweet:

which summarizes the various variants for rolling out update packages in a graphic.

For Windows 10 the Microsoft developers have therefore relied on the solution with the so-called'Delta Updates'. The delta updates only contain the patches of the previous month and no longer the complete update history of the relevant Windows 10 build. This should reduce the size of the update packages by up to 40 % (see the following diagram). 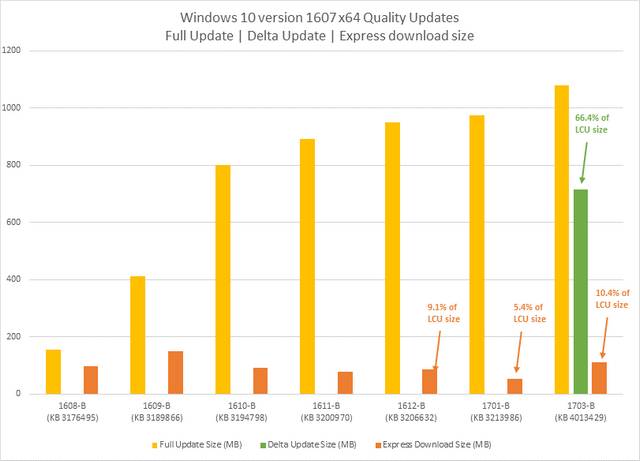 Microsoft Delta updates were introduced with Windows 10 Creators Update and are available for the following versions.

Delta updates will also be available for Windows 10 (October update), which will be released in autumn.

The end of delta updates

Now Mike Benson from Microsoft announced last Wednesday in the article Windows 10 quality updates explained & the end of delta updates the end of the above mentioned delta updates. First, he discusses the different models for update packages (Full Update, Delta Update and Express Update) in enterprise environments. Under WSUS, for example, there are still express updates that should install faster (and according to the graphics should also be more compact). He then writes that Microsoft will stop the delta updates.

The background: The concept of express updates allows to generate differential downloads for each component in full update. The generated downloads are based on the update history of the machine and the differential updates on the Microsoft update servers. This allows the scope of a full update to be distributed as a package, but the size can be significantly reduced by differential delivery (only changes to files are delivered).

For example, the latest cumulative May 2018 update (called Latest Cumulative Update, LCU) contains the file tcpip.sys. Microsoft now wants to create a differential for all tcpip.sys file changes from April to May, from March to May and from the original version to May. A device that uses Express Updates uses the network protocol to determine optimal differences between the installed version and the modifications on the Microsoft server. Then Windows Update will download only what you need. Microsoft writes that this is usually about 150-200 MB per month. The more current a device is, the smaller the size of the differential download.

As Express Update Support for third-party update managers has been available for over a year, Microsoft plans to discontinue the delivery of Delta updates. Starting February 12, 2019, Microsoft will end its practice of creating delta updates for all versions of Windows 10. Express updates are much smaller, and simplifying cumulative options reduces complexity for IT administrators. You can read more details, including the user discussion, in Microsoft's article.