[German]Hey, I feel just Wow! Because Microsoft just announced, that Windows 7 will be supported until 2023. Isn't that a good news for admins in enterprise environments?

Most of us was aware, that Windows 7 should reach end of life at January 14, 2020. After this day, no further security updates are available. That's what Microsoft told us since years. But in a Monthy Python style, we have to say 'Don't mention the Windows XP disaster'.

End of Life: Windows 7 is resilent

Having a look at the figures, from netmarketshare.com for instance, shows, that Windows 7 still is used on 40.27 % of all desktop systems. 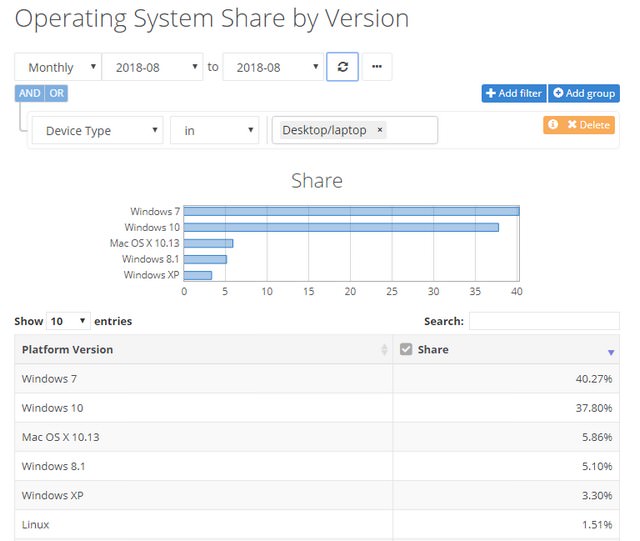 Windows 10 is bobbing at 37,8 %, the remaining operating system variants for the desktop, from Windows 8.1 to Linux to macOS, are all under 10%. You don't need rocket since to figure out, that Windows 7 will be fading out in January 2020, if the Windows 10 adoption rate stays that slow.

Microsoft has a hearth for enterprises – and their money

Within the blog post Helping customers shift to a modern desktop Microsoft places the bomb. Within a section titled 'Windows 7 Extended Security Updates', they write:

As previously announced, Windows 7 extended support is ending January 14, 2020. While many of you are already well on your way in deploying Windows 10, we understand that everyone is at a different point in the upgrade process.

With that in mind, today we are announcing that we will offer paid Windows 7 Extended Security Updates (ESU) through January 2023. The Windows 7 ESU will be sold on a per-device basis and the price will increase each year. Windows 7 ESUs will be available to all Windows 7 Professional and Windows 7 Enterprise customers in Volume Licensing, with a discount to customers with Windows software assurance, Windows 10 Enterprise or Windows 10 Education subscriptions. In addition, Office 365 ProPlus will be supported on devices with active Windows 7 Extended Security Updates (ESU) through January 2023. This means that customers who purchase the Windows 7 ESU will be able to continue to run Office 365 ProPlus.

Ok, support until January 2023 isn't granted to all of us Windows 7 users. It's only for companies, that accept to pay for Windows 7 Extended Security Updates (ESU), and it's limited to Windows 7 Professional and Windows 7 Enterprise customers in Volume Licensing.

6 Responses to Wow! Windows 7 get extended support until January 2023