[German]The fog around the release of Windows 10 October 2018 Update (Version 1809) is clearing. The Media Creation Tool allows the download with just one trick, a possible release date of October 2, 2018 has become known and more.

I’ve pointed out within my blog post Windows 10 Insider Preview Build 17763 the Final!, that Microsoft has chosen Build 17763 as release version for Windows 10 Version 1809 (October 2018 Update). Bugs will be fixed by cumulative updates, if no show stopper will be found. ow we are one step further, there are ESD downloads available, you can download the ISO via Media Creation Tool and a release date also seems to be known.

ESD stands for Electronic Software Download – these files are used to upgrade to a new Windows 10 version or create an install media. The operators of the Adguard website have found the electronic download files (ESD) on the Microsoft servers and integrated them into their download page.

But there are additional steps required to create an ISO file form an ESD download. If somebody intend, to experiment with ESD files: My colleagues from German site deskmodder.de have posted within this article the direct download links (available at pastebin) together with some hints how to create an ISO file. But that’s no longer necessary, as the ISO download is also available via Media Creation Tool (see next section).

You can use Microsoft’s Media Creation Tool (MCT) to download an ISO installation file from Microsoft servers at any time and then create a DVD or USB stick. Then you have a bootable installation medium in order to reinstall Windows 10.

Copy both files into a folder and unzip the zip file, so that the Product.cab is in the folder (this file contains the products.xml with the download links). 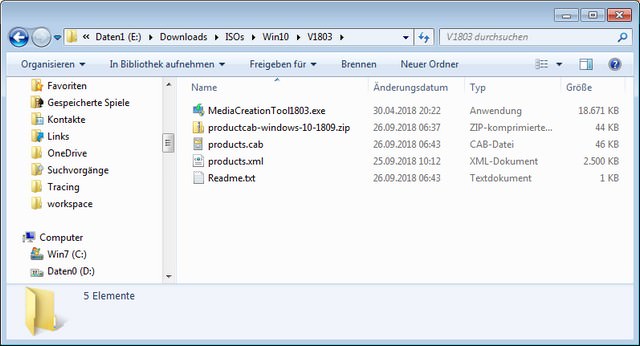 The screenshot above shows the files, where only the MediaCreationTool1803.exe and the products.cab are required. The other files are remnants from unpacking or downloading the ZIP file 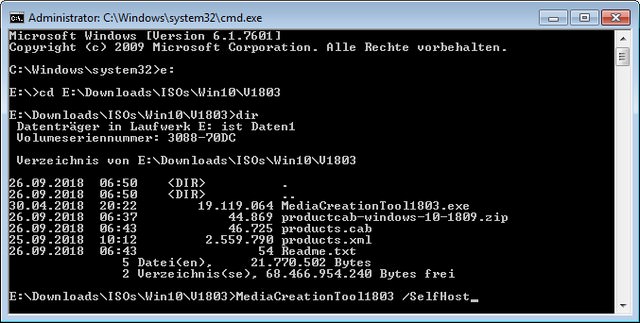 Now you have to log in under an administrator account and open the command prompt. Then switch within command prompt window to the path to the folder with the two files using the cd command. Afterwards start the Media Creation Tool with the option /Selfhost. This switch forces the Media Creation Tool to offer the options from the products.xml for selection and to use them afterwards.

The above commands show the details, whereby the square brackets […] in the first line serve as placeholders, where you need to insert your path to the folder with the files. Then the Media Creation Tool guides the user through the steps with the license agreement, the selection whether the machine is to be upgraded or whether an ISO installation file is to be saved. 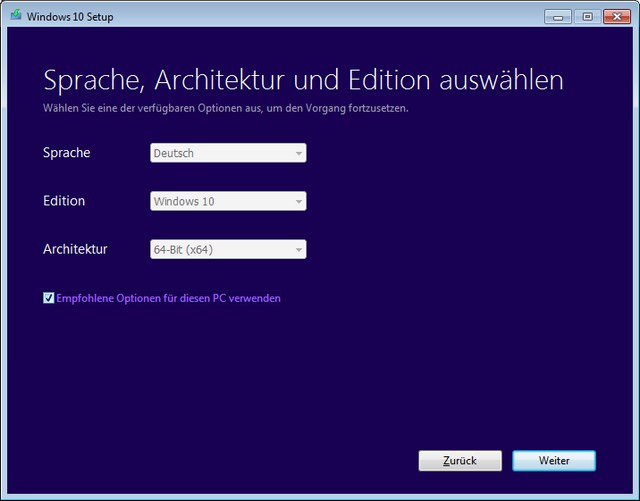 The above screenshot shows the (German) options to select the language, edition and architecture. MCT automatically suggests the appropriate options. To customize the selection, deselect the Use recommended options for this PC check box (if shown). The form fields are then released. Under Architecture you can download either a 32- or 64-bit version or both versions. If everything goes smoothly, the Media Creation Tool downloads the installation image for Windows 10 V1809 and creates the installation medium.

Addendum: According to a comment within my German blog, there is a modified Media Creation Tool (32-bit) or (64-bit) available (download links see), that forces the download of Windows 10 V1809. However, it’s a modified file from an unknown source. Therefore a warning: MCT runs with administrator rights. I would keep my fingers away from that solution. The MCT 1803 mentioned above is downloaded from Microsoft and the Product.cab contains only one xml file.

When will Windows 10 Version 1809 be offered as October 2018 Update for the first time via Windows Update Search? As far as I know, Microsoft has not announced this date. But user abbodi86 found the file products_2018_10_02.xml on the web and posted the information at askwoody.com in this forum thread. This XML file contains the links for the ESD files for the upgrades. The file itself is dated October 2, 2018.

But the XML file also contains the date, as Woody Leonhard explains in the tweet above. Leonhard has published this ComputerWorld article about this topic. Note: Microsoft has now deactivated the link for the XML file to download the ESD files.

Furthermore, Microsoft provided the Software Development Kit (SDK) as a preview of build 17763 for developers, as I saw in the following tweet.

This entry was posted in Windows and tagged Windows 10 V 1809. Bookmark the permalink.