Success for Apple and its recently released iOS 12, which runs on just one in two iOS devices a month after release, Apple just announced.

We are accustomed to Apple success stories regarding the distribution of iOS. As soon as a new version is released, many device owners updates very quickly. Only with iOS 11 the change was a bit slower because of many initial bugs. The fragmentation of the iOS versions on Apple's mobile devices like iPhone, iPod or iPad is therefore low. Apple's latest figures show that 50% of the devices run iOS 12 (left graphic). 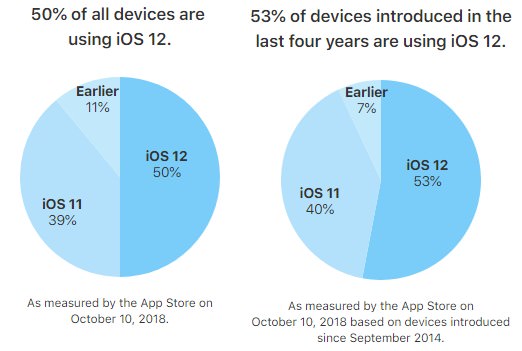 39% of the devices are still running iOS 11. It is also interesting to note that 53% of the iOS devices released in the last 4 years are running now on iOS 12. Here Apple has a huge trump card in its hand for Google with its Android. (via)

This entry was posted in ios and tagged iOS 12. Bookmark the permalink.