A brief information for Windows 7 users. Update KB4462923 (Monthly Rollup for October 2018) has been re-released on November 1, 2018 . It’s available again via Windows Update as an important update and is provided in Microsoft Update Catalog.

I’ve addressed this update within my blog post Patchday: Updates for Windows 7/8.1/Server (10/09/2018). Some people experienced install issues with this update, and there are reports, that the update has been pulled and re-released (see Windows: Update issues and –re-releases October 2018).

There was already a German blog reader who has posted a comment, asking, why update KB4462923 has been re-released in the Microsoft Update Catalog: 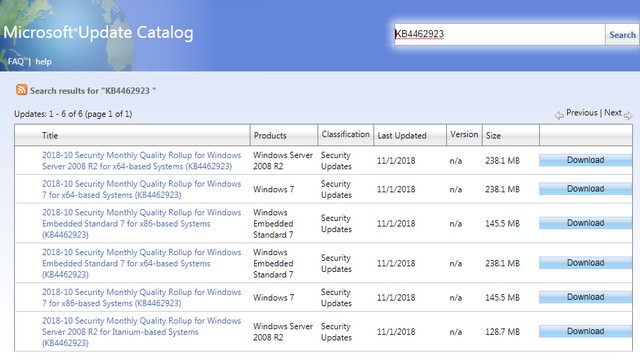 Update KB4462923 is listed with the Last Updated date of Nov. 1, 2018 for Windows 7 SP1 and Windows Server 2008 R2. Microsoft might have re-released the update again. At askwoody.com reader @PKCano reported the following:

AFTER the reboot, KB3177467 v2, the Servicing Stack released 10/9/2018 appeared and installed without requiring a reboot. The hash is the same and the file size is the same. Must be a metadata change to let it install without an error before KB3177467 v2 (the SSU).

Update KB4462923 was offered as an important update in Windows Update and the install checkbox was checked. After a restart the Servicing Stack Update (SSU) KB3177467 v2 was offered and could be installed successfully. Woody Leonhard has amended his blog post – it seems that there are still issues with this update.

I’ve amended my blog post. Yep, it looks like MS screwed it up again — after re-releasing the Win7 Monthly Rollup yesterday. Those who hit an error need to manually install the latest SSU.

I did not find an official documentation from Microsoft for the re-release of the update.

This entry was posted in Update and tagged KB4462923, Update, Windows 7. Bookmark the permalink.