[German]Microsoft is probably able to track the Microsoft store app history, i.e. what you have loaded as an app in the store, even without a Microsoft account. This may be shown within the store's app history.

It has been known since a while, that Windows 10 supports access to the Microsoft Store, at least in the Pro version, even without a Microsoft account. I found first hints in 2015 here. In November 2016 German magazine heise.de took up the topic and described that you can still select and download free apps in the Microsoft store with local accounts (as long as they are not for adults). But the heise.de article describes some issues with this approach (for instance, if an account has been temporarily a Microsoft account, and then changing it to a local account, it's not possible to access the store from this local account).

I just checked it on my Windows 10 Pro test machine and logged in to my local administrator account. If I go to the Store app, I can view the app history (also without MS account) under (see screenshot below). 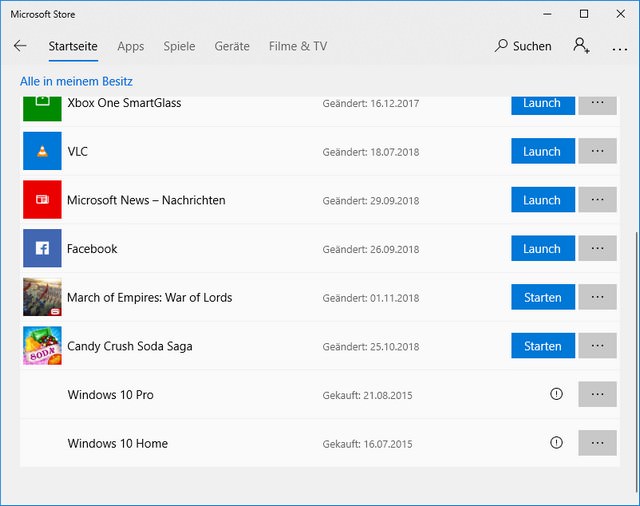 The gray icon in the upper right corner of the store flags the missing Microsoft account. Within the screenshot you can see which apps I used within this account. The list shows some apps that have been updated in the last months on the machine.

But what surprised me at this point was the last two lines. Apparently I installed Windows 10 Home on July 16, 2015 – which is probably true (I had the RTM a few days earlier and tested it). On August 21, 2015 I tested the upgrade to Windows 10 Pro (V1507), which was also noted. In addition, the VLC app and some of Microsoft's stuff are bobbing around on the machine and are assigned to the local account.

So far I hadn't thought about this topic (naively). I don't use any apps (except that I might test something) and therefore never needed to check the app history of a local account.

Within this German article, news site heise.de reports that the machine knows the app history even without a Microsoft account. The article also shows a screenshot of the store apps, which lists some 'downloaded' apps with a local account. Apparently the Microsoft servers remember which apps were bought by using the machine ID of an activated Windows 10.

This history is probably not stored on the client, but is registered for the machine in Microsoft's cloud. heise.de now points out an unpleasant implication in the article, which I didn't have on my radar. Since the Microsoft servers remember when a machine visits the Microsoft Store and downloads apps, the app history also survives a new installation of the operating system.

That's no problem, because Windows 10 was activated by a unique ID – and can be activated again. But it's stupid that, if a buyer of a used Windows 10 machine can see, which apps the previous owner has been obtained from the store under a local account.

This can only be avoided by logging in with a Microsoft account when using the store. Then the apps will be assigned to this account and won't show up if you downgrade the account to a local account. To my knowledge, deleting the app history is not possible – or did I miss something?

This entry was posted in Windows and tagged App, Store, Windows 10. Bookmark the permalink.