[German]Shortly before the release of Windows 10 V1903 (guess, we will have it sometimes in April), Microsoft took an unexpected move and declared Windows 10 V1809 ready for 'wide use', i.e. 'business ready'.

The announcement of Microsoft employee John Wilcox can be found in the article Windows 10, version 1809 designated for broad deployment.

Based on the data and feedback we have received from consumers, OEMs, ISVs, partners, and business customers, Windows 10, Version 1809 has been released for widespread use. This means that the half-yearly channel (SAC) for version 1809 is now displayed on the Windows 10 version information page. We will continue to communicate the transition from targeted to broad deployment status.

According to the Life Cycle Policy, Windows 10 Enterprise and Windows 10 Education version 1809 receive support for 30 months (see also Windows 10 Support extended to 30 months (sometimes)). This support period is not counted from October 2, 2018 (1st release). Microsoft is using November 13, 2018 (date of the second release, after the rollout was stopped due to fat bugs), to count that support period. Microsoft publishes the information about the end of support of Windows 10 in the Windows lifecycle fact sheet – see also the following figure.

The move comes as a bit of a surprise to me, but is formally in line with the Microsoft rules – even if you had to 'bend' them a bit. Surprising because this is the third time I've read from Microsoft that Windows has been released for widespread use (see Windows 10 V1809 announced as 'general available' for instance). Since Microsoft did not force the distribution of this version, however, there is the situation that the October 2018 update has arrived only on approx. 1/4 of all Windows 10 machines (see also Will Microsoft drop Windows 10 V1809?). 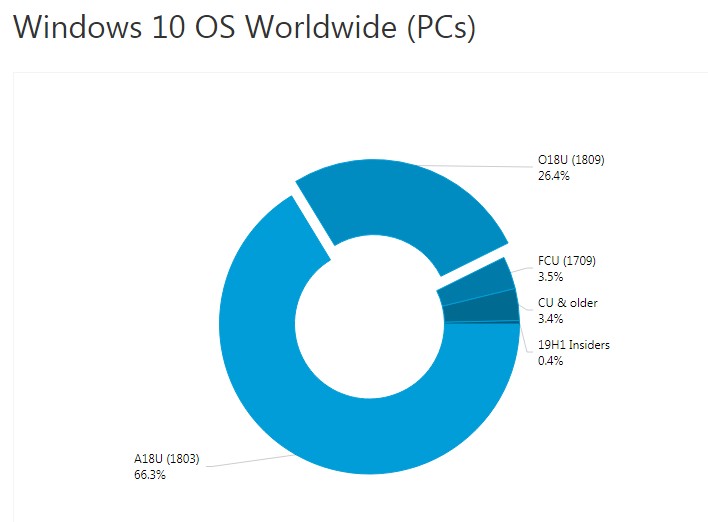 Yesterday's announcement by Microsoft, on the other hand, is a formal step that gives the go-ahead for the rollout of this version in companies. In other words: Windows 10 V1809 has now arrived in the Semi-Annual Channel (SAC). Previously Windows 10 V1809 had the status SAC-T (stands for Semi-Annual Cannel targeted), i.e. the build was provided only on certain machines (targets).

Microsoft wants to make this distinction between SAC-T and SAC obsolete, as I explain in the article Windows 10: SAC-T is dead for Windows Update for Business.

The date on which a Windows 10 build gets SAC status is relevant because the support period for cumulative updates is determined.

But Windows 10 V1809  comes along with some legacy issues. A look at the Windows 10 update history shows that Microsoft has fixed a bunch of upgrade blockers, but there are still some update blockers for the V1809. Even more revealing is a look at the list of known problems in the cumulative update KB4489899 of March 12, 2019.

Details can be found in the linked KB article. And it isn't mentioned at known issues, there is also a bug in network search with SMB1 switched off with Realtek network interfaces via LAN. Here the service FDResPub (automatic start) must be started a second time to make the PC visible in the network.

However, most of the above issues are relevant to enterprise environments. So I could imagine that administrators in companies wait a few more days before rolling out the V1809 more widely. Or how do you handle that?

In a separate paragraph of this article Wilcox has announced a media refresh for the ISOs in the Volume License Servicing Center for April 2, 2019. This means that the ISOs will then be on the respective update status (specifically Build 17763.379 with updates from March 12, 2019). German site deskmodder write here that the Media Creation Tool then also generates updated installation files when downloading.

This entry was posted in Windows and tagged Windows 10 V1809. Bookmark the permalink.