[German]A brief information for users of Windows 10 on Zen-based CPUs, which became known in the first half of June 2019. In Windows 10 May 2019 Update (Version 1903) Microsoft has made improvements and now supports the AMD CPUs more optimally. I'll just post them here in the blog – maybe the info is useful for someone.

Zen is a processor microarchitecture (x86-64) of the company AMD. The market launch of the first Zen-based processors under the brand name Ryzen took place in March 2017. 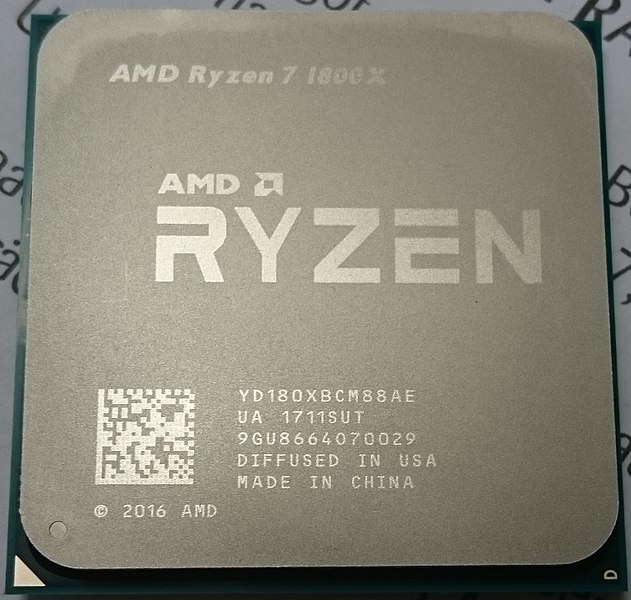 With Windows 10 there was the problem that the operating system decides via the Windows Scheduler how threads are distributed to the processor cores and whether these cores are to be run at a higher clock rate. Microsoft had previously optimized the Windows Scheduler of Windows 10 primarily to Intel CPUs. Therefore, Zen CPUs from AMD had issueswith the optimal use under Windows 10, which led to performance losses and poor utilization of the cores on the CPU.

in the already released Windows 10 1903 there is an important innovation regarding all "Zen" based CPUs. The Windows Scheduler is now more powerful and can handle the architecture of the "Zen" based CPUs better.

Like for example the cluster construction from CCX modules. Here the load is better distributed between individual CCX clusters and no longer jumps back and forth.

Also the scalability of the clock rates should be increased significantly and the latency for up- and downclocking the CPUs should be reduced from 30 to 1-2ms. 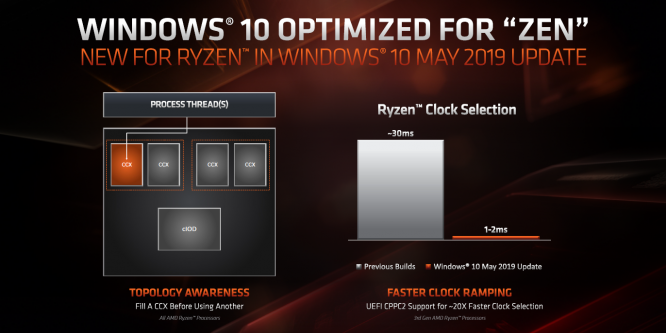 Techradar deals within this article with this topic. The core statement: In the previous Windows 10 versions, the Windows Scheduler caused problems that affected the performance of the AMD Ryzen processors. Windows 10 Version 1903 (May 2019 Update) changes the functionality of the Windows Scheduler when running on AMD hardware. At the Techdays, AMD also presented slides showing that the PCMark 10 App starts 6% faster with the Windows 10 May 2019 Update thanks to Ryzen optimizations. In addition there is also a 15% improvement in the game Rocket League, if you play it with 1080p. 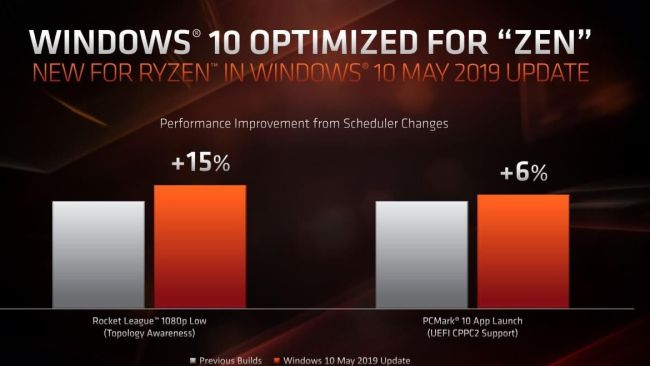 The above slide shows these performance improvements again as a graph. Source for the news is probably Windows Latest – more slides are available here. Gero now asks the following questions:

For me there is also the question how it looks like with server CPUs? Windows Server 2016 and 2019 rely on older Win10 builds like 1607 and 1809. Will there be improvements there by cumulative updates? Wait and see.

Maybe because under server conditions and applications the load is always 100% anyway, the load distribution of the CCX modules is not such a big deal.

But with the EPYC CPUs with 4 CCX clusters and up to 64 cores and 128 threads for the next generation, I'm already thinking about that…

I haven't dealt with this topic yet, because I don't have AMD CPUs in use and my test systems are many years old. But I don't think Microsoft is doing anything about Windows 10 V1607. Whether Windows Server 2019, which is based on the Windows 10 V1809 kernel, will get a corresponding update for the Windows Scheduler will have to wait and see.

This entry was posted in devices and tagged AMD, Windows 10 V1903. Bookmark the permalink.