[German]In a few months we will get the autumn edition of Windows 10, currently in development as 19H2. Here is an overview of what might change with regard to the installation of this function update.

What Microsoft is planning for the next feature update

Microsoft had announced some time ago in the blog post Evolving Windows 10 servicing and quality: the next steps that the next feature update would focus primarily on improvements in performance, quality and features for business users.

The next feature update for Windows 10 (known in the Windows Insider Program as 19H2) will be a scoped set of features for select performance improvements, enterprise features and quality enhancements.

Quality improvements and optimizations of the performance are surely very meaningful measures, the versions 1809 and 1903 could not convince in this respect nevertheless really. In my blog post Windows 10 19H2 (18362.10000) released, I discussed some speculations about what might change. But it's not clear to me, what Microsoft means with 'enterprise features'. After the disaster with the release of the Windows 10 October 2018 Update (V1809) and Windows 10 May 2019 Update (V1903), Microsoft had allowed some control over the installation of the feature updates.

If the user searches for updates and a function update is pending, he can select via a link when he wants to start the download and installation. This process can be postponed until just before support for a Windows 10 build expires, and cumulative updates can be installed. I reported about this in the blog post Windows 10 May 2019 Update brings back Update control.

Microsoft has announced that it will deliver the feature update on Windows 10 19H2 in a new way.

I've discussed some aspects of this approach within my blog post Windows 10 19H2 (18362.10000) released, In the first moment it was not so clear to me what all this means. But now it becomes clear what Microsoft is going to do – they simply deliver two packages – a cumulative update for Windows 10 V1903 and a feature update for Windows 10 V1809 and earlier. Tero Alhonen interprets the whole thing in such a way that, as with other updates, with Windows 10 Version 19H2 there is no possibility to delay the function update in the extended options by 365 days.

He came to this conclusion, because defer updates may be set up to 35 days (see screenshot below). 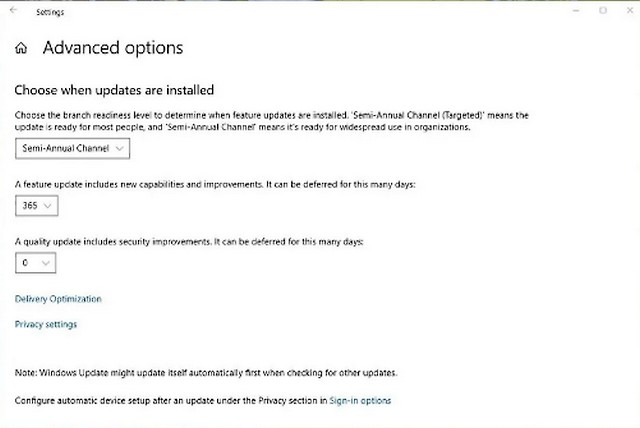 But I don't think this conclusion is particularly valid at the moment. Because there are some things to consider. Once Microsoft has not yet revealed any details about what exactly should happen. According to the following screenshot, Microsoft can also provide cumulative updates with the same mechanism as feature updates. Then the user decides by selecting the download link whether and when the installation is triggered. 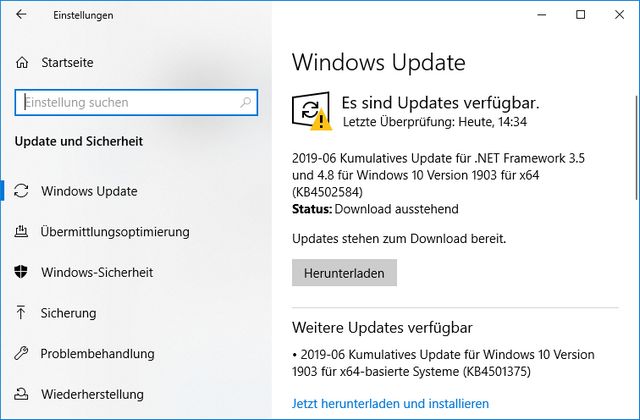 Whether there will be this possibility to control the installation of this 'feature update' delivered as a 'quality update' under Windows 10 19H2 is still unknown. Microsoft can also specify in the meta files of the package that the update is to be installed immediately, so that the above selection does not appear. Microsoft is keeping a low profile here – I'm guessing that an option will be offered for download first. Shortly before the support expires, a forced upgrade will be performed.

The end of the semi annual feature updates?

The only thing that is currently certain is the type of installation. The upcoming fall update of Windows 10 will install only the patches, like a cumulative update. The replacement of the complete operating system (Windows 10 V1903), as with earlier versions, will no longer exist.

If Microsoft maintains this model, the semi-annual feature update is history. There will be a function update in the spring, while a stability improvement will come as an update in the fall. Some people interpret this as a 'service pack'.

A user has detected, that cumulative update KB4505903 brings functional changes to Windows 10 19H2. The user posted his findings at reddit.com.

This entry was posted in Windows and tagged Windows 10 19H2. Bookmark the permalink.