[German]Microsoft has announced this this that the Windows 10 May 2019 update, version 1903, is now available for all users and machines that still have Windows 10 version 1803 installed.

Windows 10 May 2019 update was released for interested users almost at the beginning of April 2019 – the broader distribution took place at the end of May 2019. However, Microsoft has still keept 'a brake' to the rollout, so that machines that were not compatible were not receive the feature update.

Microsoft is ready for a broader rollout

With the cumulative updates released in September 2019, Microsoft has fixed a number of bugs and most upgrade blockers are listed as 'fixed' on the Windows 10 V1903 status page. 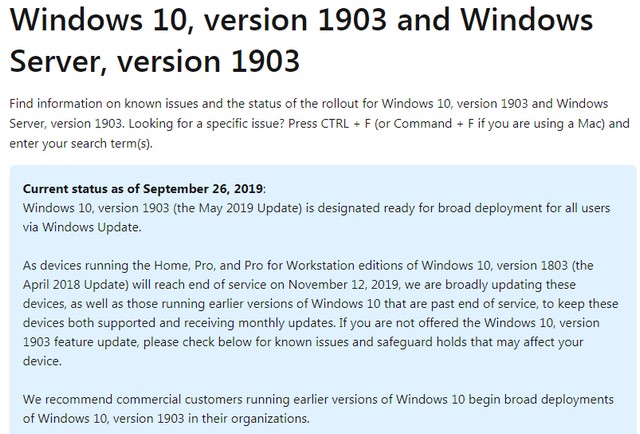 On September 26, 2019, Microsoft published the explanation shown in the above screenshot on the Windows 10 V1903 status page.

You can check the Windows 10 V1903 status page to see if an upgrade blocker prevents the function update.

The days before some news sites reported, that Windows 10 Version 1903 is already running on 45.5% of Windows 10 computers. The number comes from AdDuplex. I hadn't reported because I think the numbers of AdDuplex are too uncertain..

Whether Windows 10 Version 1903 is really ready for a broader use, also in enterprise environments, every user will have to answer himself. Owners of a Surface Book 2 still suffer from the fact that the NVidia GPU is not properly supported. I have booted an old Sony VAIO notebook for testing purposes. The feuature update was installed on this notebook on Windows 10 version 1803 a few months ago. So far the version 1903 has not been offered there. Today the feature update to Windows 10 Version 1903 was available and I clicked the link to download and install. 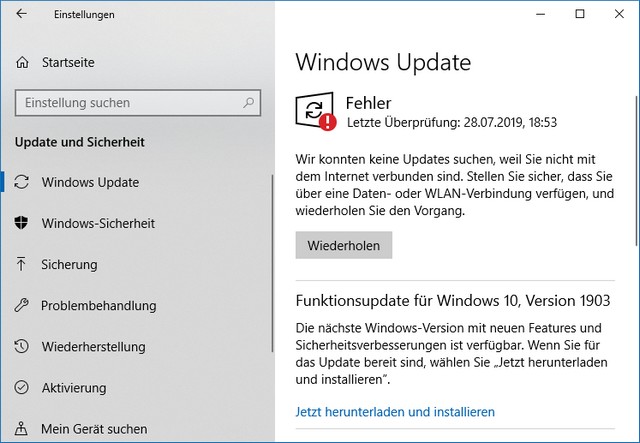 I have not yet been able to test whether an upgrade will then work. Exactly this question will have to be answered by every potential user. At least the updates released in September 2019 for Windows 10 Version 1903 still have some flaws – and the Windows build itself is not yet error-free.

In a blog post, Microsoft also explains the machine learning (ML) approach that controls the rollout of Windows 10 feature updates. With Windows 10 Version 1803, this approach was tried for the first time. At that time, six core areas of PC health (e.g. general PC reliability) were considered to determine whether the feature update process was smooth.

With Windows 10, version 1903 (May 2019 update), the third iteration of ML's rolling out a feature update is available. Microsoft can now evaluate 35 areas of 'PC health' to control the rollout. The process will continue to evolve with additional measures to ensure that a feature update installation is as trouble-free as possible.

If you are interested in the topic, you will find some details on how to select the PCs to be updated first in the article. I think Microsoft currently has no other choice but to take this approach. But I always think about the article Ex Microsoft employee explains the worse Windows 10 quality, I've published a fews days ago.

This entry was posted in Update, Windows and tagged Windows 10 Version 1903. Bookmark the permalink.