[German]Microsoft stops its support for the Cortana assistant in Android and iOS at the end of January 2020. Here is some brief information what that means and what is changing.

Microsoft has started once with big ambitions and provided the digital assistant Cortana for Android and iOS as an app. For Android, for example, Cortana is available in the Google Play Store. 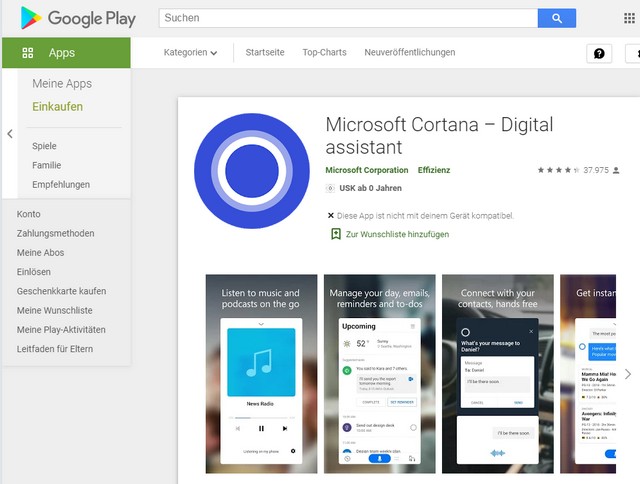 In a brief support article dated November 15, 2019, Microsoft Brittain announces here its plans some changes for Cortana. To improve the personal digital assistant, Redmond will integrate Cortana into Microsoft 365 productivity applications. As part of this evolution,  Cortana is vanishing on Android and iOS. Microsoft says:

As part of this evolution, on January 31st, 2020, we’re ending support for the Cortana app on Android and iOS in your market.

This support article linked above refers to Great Britain – but MS Power User mentions here the same messages for Microsoft Australia and for Microsoft Canada. And neowin.net writes here that this applies to all countries except the USA. For affected users, their Cortana content such as reminders and lists in the Cortana Mobile App or Microsoft Launcher will no longer work after January 31, 2020.

However, the content can still be called via Cortana under Windows 10. In addition, Cortana reminders, lists and tasks are automatically synchronized with the Microsoft To Do App, which you can download to your mobile phone for free.

After January 31, 2020, the Cortana Mobile App will no longer be supported on mobile devices and an updated version of the Microsoft Launcher will be available without Cortana. Microsoft is probably consistent – if a product does not succeed, it will be discontinued.

This entry was posted in Android, ios, Software and tagged Android, Cortana, iOS. Bookmark the permalink.