[German]Currently Microsoft confuses users once again with a nasty behavior when reinstalling a Windows 10 Home Version 1909. Some users only have the option to create a Microsoft account – a create local account option isn't offered. However, this limit can be handled with a simple trick.

At the end of September the topic already popped up in Windows 10 Insider Preview Build 18363. A US user had noticed that he could no longer set up a local user account when reinstalling the Windows 10 Home Preview. He was forced to set up a Microsoft account during setup. He had posted this behavior on reddit.com.

Some sites covered this story, but I had not addressed it here within my blog, because I didn't find another source of this behavior. And my German MVP colleague Martin Geuß had executed also a test with a German version of this Insider Preview for Windows 10 Home. In this article he came to the conclusion that nothing had changed.

Later I found out that Microsoft had done an A/B test with US-Windows insiders. There were probably only a few people who saw this behavior at all. This explains why only one person on reddit.com reported this. Since there was no such behavior in the other insider builds, this topic became out of my view.

US blogger Paul Thurrott wanted to document the setup steps for a new installation after the release of Windows 10 Version 1909 and then came across a curiosity. While the professional version of Windows 10 November 2019 Update (Version 1909) only showed minimal changes in the OOBE phase, Windows 10 Home V1909 had an anomaly. There he suddenly no longer had the option to create an offline account (standard user account). 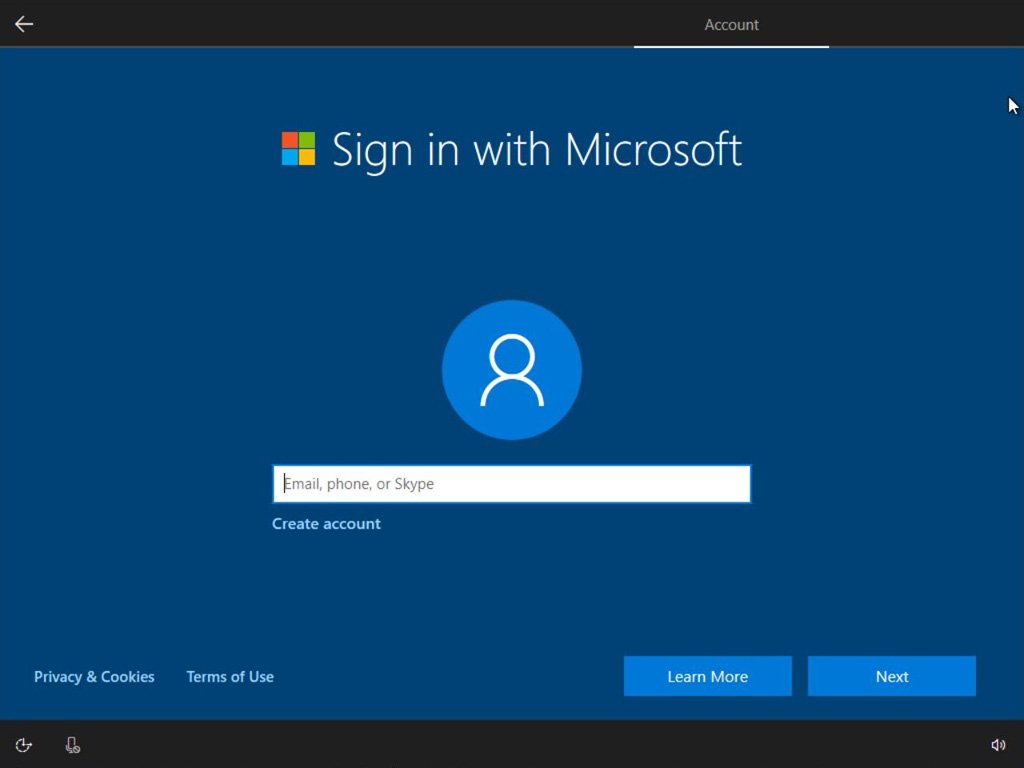 (US OOBE dialog to set up a first account, Source: Thurrott/Dr. Windows)

The picture above shows the OOBE page whether the option from earlier Offline Account Windows 10 versions is missing.

Just a tip: If the user prevents an Internet connection before launching the setup, the OOBE page shows the option for setting up an offline account as usual. The setup then falls back to this position.

And in Windows 10 Pro and Enterprise, the OOBE account setup hasn't unchanged from the previous versions anyway.

Does this only apply to US users with Windows Home?

I knew from Martin Geuß that he had intensively tested the behavior in the Insider Preview. So I found quickly his new German article Windows 10 November Update: US-Version "zwingt" zum Microsoft-Konto at Dr. Windows. He did a new install test again and found, that he has the option to create a first local account in Windows 10 Home 1909. It's like the Insider Preview: Users with German language pack still get the option to set up a local account during setup – no matter if a Home or Pro edition of Windows 10 V1909 is reinstalled.

That was the point, where I assume, it affects only US users. But at this point I have to correct myself – as the comments of several readers of this blog and at German magazine heise show, some users with a German Windows 10 Home V1909 also seem to be affected.  And I've received feedback, that this behavior occurred with Windows 10 V1903 as well.

Just a side note: It has always been difficult to recognize the option to create a local user account during setup, because the option is drawn in blue ink on a blue background. So I'm not sure, if some users overlooked this option. But the screenshot shown above clearly say, there is no local account option.

For me, it remains unclear at this point what's Microsoft's strategy? For Microsoft Germany, such a move is only water on the mills of the 'Windows 10 is not DSGVO-compliant and Microsoft cannot be trusted, they want to force us into the cloud' discussion. At this point I may link to the German article Die tickende DSGVO-Zeitbombe von Microsoft of the colleagues from Golem, who bring the problem to the point.

What's Microsoft's credo? 'We wan't to be as clear and transparent as possible'. Good joke I guess.