Windows 10 is on 1 Billion devices

[German]Microsoft has announced that the number of 1 billion Windows 10 units worldwide is reached. Here are a few insights and some thoughts about the new figures.

This figure of 1 billion active computers running Windows 10 was announced by Microsoft on 16 March 2020. “We are pleased to announce today that over one billion people in 200 countries have chosen Windows 10, resulting in more than one billion active Windows 10 devices,” writes Yusuf Mehdi, corporate vice president of Modern Life and the Search & Devices Group of Microsoft. “We couldn’t be more grateful to our customers, partners and employees for helping us get here.” Then Yusuf Mehdi continues:

With the release of every new build of Windows 10, we have seen customer satisfaction improve as we have made fixes and added new capabilities and experiences. We are humbled that customers are choosing and loving Windows 10, and there has never been a more important time for a secure, reliable platform that can empower people to create, educate and communicate wherever they are.

which reminds me on the parallel universe of Donald Trump. Just to remember: We have had the first year of Windows 10 with forced upgrades from Windows 7/Windows 8.1 – and class action suites against Microsoft. And we have had the disaster with pulled Windows 10 Version 1809 and Windows 10 Version 1903. And we have a monthly update mess with Windows 10 – not to mention the latest move described in the blog post Windows 10 V1903/1909: Nag Screen ‘Let’s make Windows even better …’. Perhaps it’s the cultural gap between me, a sober European and an overwhelming US citizen. But writing ‘We are humbled that customers are … loving’ seems to me a total lost of reality.

This figure of 1 billion Windows 10 systems includes everything that could be swept together: PCs, laptops, Xbox One consoles and HoloLens devices. With a neutral presentation of the facts, I would now have congratulated Microsoft on this figure. But now I just link to the most embarrassing advertising statements I’ve personally ever read from Redmond.

Redmond has a duty, does they fulfill that?

Oh, and one more thing, from now on it’s time to slap Redmond on the wrist for every shit, they release. Because with 1 billion Windows 10 systems, Microsoft has an immense responsibility – and bullshit bingo is no longer tolerable. I’ve expressed some thoughts in my yesterday post The homemade structural IT crisis.

And we should also mentioned, that the 1 Billion Windows 10 system has been announced by Terry Myerson at BUILD 2015 for the year 2018. 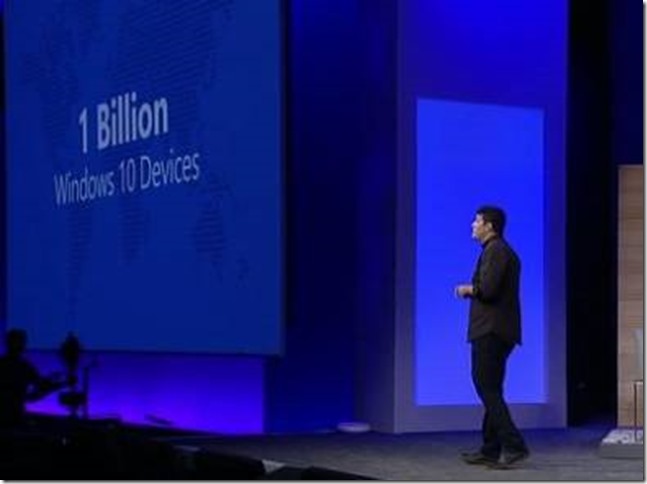 It took 2 years longer to reach this value. Although I actually expected that Microsoft would go public with the number 1 billion in January 2020. That’s when the support for Windows 7 ended. It tool Microsoft another two months, until the figures seems to be clear. Mehdi also mentioned 17.8 Million Windows Insider testers – but that’s just a figure with no real impact (imho). I won’t write anything more about this number – everyone may answer the question what these numbers have brought to Windows 10 in terms of quality and bug fixes.