[German]It is a strange story that is currently being picked up by the media. Android users get push notifications with the text ‘Test’ in their Messenger apps. At the moment it’s probably unclear where these messages come from – from malfunction to hack, speculation ranges.

Microsoft is investigating the case

A few hours ago I already noticed a tweet from the Microsoft 365 Social Media Team @MSFT365Status stating that they are analyzing a problem. Users would receive the message ‘test’ on their devices. Later it was said that it concerned Android devices. 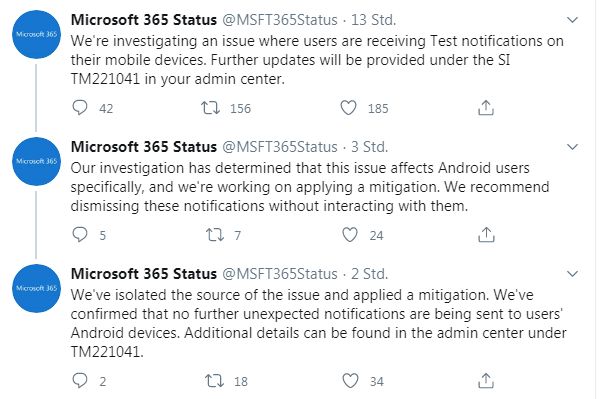 The last status entry states that the cause has been found and remedial action has been taken. Martin Geuß of Dr. Windows has published this article on the subject. He gets the following push notifications in his Team App – other Team users experience the same.

The sender of the test notification is ‘FCM Messagess’, which raises serious doubts because of the spelling. Martin writes that new notifications with the text “Testing notification from Microsoft to investigate the problem” appeared later.

The abbreviation FCM stands for Firebase Cloud Messaging. This Google service is also used by Microsoft for push notifications. German site heise writes here that other services like Google hangouts also receive such notifications. Google, Microsoft and other users of the FCM service began investigating the incidents. However, according to the message in the above tweet by Microsoft, the problem should have been solved by now.

This entry was posted in Android, issue, Software and tagged Software, Störung. Bookmark the permalink.