[German]Microsoft requires registration and use of a Microsoft account (online account) for many activities, but reserves the right to block and deactivate this account immediately. For the person affected, this means 'digital death' and possibly financial loss. This is the first time that a German affected person has filed a lawsuit against Microsoft Ireland as a contractual partner.

I had already addressed the topic of Microsoft account suspension in my German blog. Microsoft now requires a Microsoft account by default for its products. With online services such as OneDrive, outlook.com, Skype, teams, etc., one could still understand this – although it used to be possible with other registration methods. But on-premises products like Microsoft Office are without a Microsoft account not really useable.

German WIMVP colleague Martin Geuß has just published his article Windows 10 20H2 installiert und Neuerungen angeschaut: Mit Edge, Kontozwang und Familien-Einstellungen, where he pointed out, that the upcoming fall version 20H2 of Windows 10 forces the use of a Microsoft account. And Microsoft Office is virtually useless without a Microsoft account.

I had pointed out here in the blog in various posts (see link list at the end of the article) that Microsoft can and does deactivate online accounts arbitrarily. For example, users of Microsoft Office experience that a new account will be closed immediately if no mobile phone number is provided during registration (see my German article Werden Microsoft-Konten von Office ohne Telefonnummer gesperrt). This is similar handled with Skype accounts. 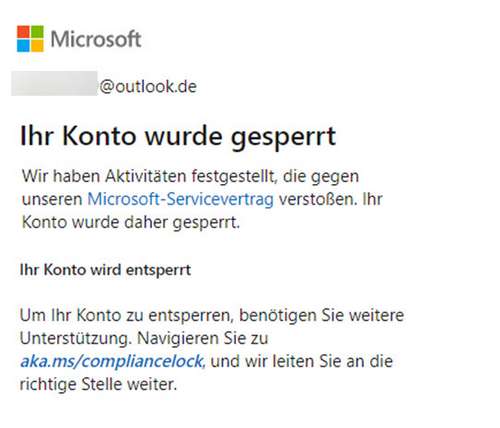 And there are the cases where users of a Microsoft account suddenly receive a notification that the account will be suspended for violating the Microsoft service contract. I had this more detailed in the article Stop: Arbitrary blocking of Microsoft Accounts. The perfidy of the whole thing is:

As a user, you are simply the dumb one and after the account has been suspended/deactivated, the affected person is 'digitally dead' – purchased content as well as stored content has disappeared into digital nirvana. There is simply no possibility of objection.

Together with MVP colleague Martin Geuß from Dr. Windows, I have been collecting such cases in Germany over the last few months and the whole thing has been compiled by both of us in various articles. Martin Now Martin Geuß has informed me that a affected German person has filed a lawsuit against Microsoft Ireland. This is the contractual partner for the various online services that European users can connect to a Microsoft account.

Up till now, the affected person does not know where and how he is supposed to have violated the terms of service. He therefore regards the suspension of his Microsoft account as arbitrary and unfounded. The complaint therefore focuses on the following key items:

There is an earlier ruling by a German court against Amazon, in which the plaintiff had to be granted access to his paid content despite the account being blocked. We have to wait and see, how the above case end. If Microsoft suddenly activates the suspended account again, the lawsuit may collapse and nothing is legally clarified. Martin Geuß has provided a few more details on the facts of the case in the German article Konto gesperrt: Nutzer reicht Klage gegen Microsoft ein.

This entry was posted in General and tagged Microsoft Accounts. Bookmark the permalink.