Brad Anderson spent nearly 18 years at Microsoft after leaving Novell and was corporate vice president of commercial management experiences for Microsoft 365. He was one of Microsoft’s high-level Windows/Microsoft 365 managers, handling Windows management and security for PCs and mobile devices, as well as enterprise deployments of Microsoft 365 services. Anderson is moving back to his home state of Utah to join Qualtrics as president of products & services. 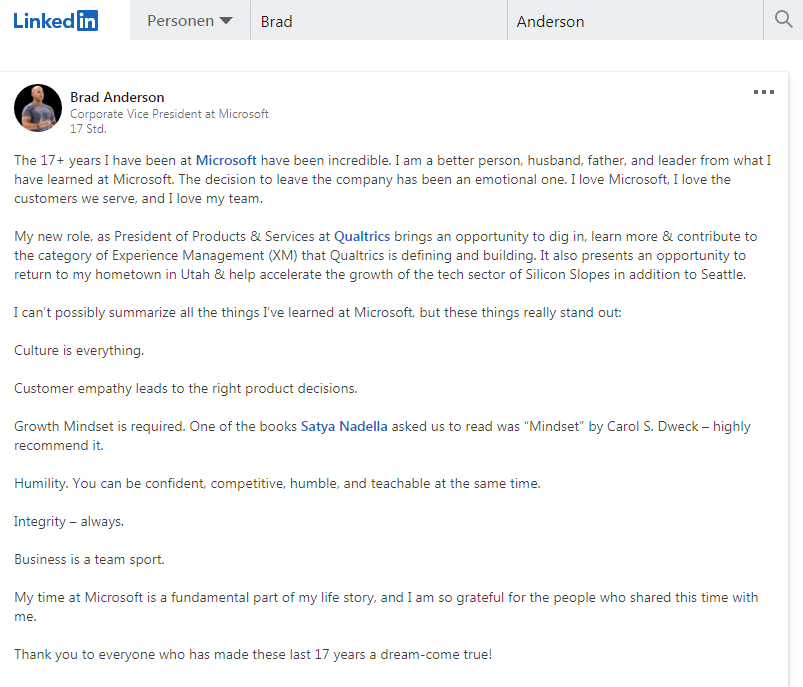 The announcement can be found on LinedIn (see screenshot above), where Anderson does not give any reasons for the change, but sings the praises of his previous employer. Possibly it’s private reasons that prompted Anderson to make the switch – don’t like to speculate there. Interesting footnote on the side: Julie Larson-Green, who was responsible for Windows 8.1 development after Steven Sinofsky’s departure, but then left Microsoft in 2017, is also employed at Qualtrics. In addition, Zig Serafin, a former Microsoft executive responsible for Offic 365, now works as CEO at Qualtrics. Corporate vice president for Microsoft 365 Security and Compliance, Harv Bhela, will take over Anderson’s post. It is not yet known when the change will take place.

Mary Foley has compiled some information at ZDNet here. There you also read that according to Anderson’s LinkedIn page, the number of daily active commercial (business) Windows 10 users is more than 100 million monthly. The number of Office 365 monthly active users is more than 40 million per year. And the number of monthly active users of ConfigMgr and Intune management products is more than 150 million. However, I can personally do very little with these figures, since the unit of measurement ‘monthly daily active users’ means nothing to me off the top of my head – and the numbers are somehow quite small compared to the 1.5 billion Windows users that were once propagated. Anyone who can put this in a better perspective?

This entry was posted in General and tagged Gemeral. Bookmark the permalink.