The New Windows is coming; Windows 10 21H1 already rolled out?

[German]Today, a few more topics are summarized in a collective article. For a week now, there has been a rumor that Microsoft will soon be coming around the corner with a “New Windows”. And the next version 21H1 of Windows 10 has already been rolled out to many machines without users suspecting it. In addition, Windows Server 2022 has been released as a preview.

Windows 10 21H1 will, after all, be the new spring release of Microsoft’s operating system. When exactly this will be released is currently not officially known. As of March 2, 2021, Microsoft has begun delivering build 19043.844 of Windows 10 (21H1) as a preview to Windows Insiders in the beta channel. The new build is simply rolled out as update KB4601382 and is available for Insiders to install in Update Search. This was announced by Brandon Le Blanc in the Windows blog.

After the February 17, 2021 announcement of Windows 10 21H1 (see Windows 10 21H1 officially announced, testing started with Insider in Beta channel), I’m assuming the general rollout isn’t that far off – it may be late March or April 2021. Which brings me to the next point. The changes that Windows 10 21H1 will bring should already be present on machines running Windows 10 version 2004 and version 20H2.

The new Windows is coming

It was already reported in the Internet a week  ago: Microsoft could soon announce a product “The new Windows”. The basis was the following tweet from WalkingCat at the end of February 2021, which was picked up here. 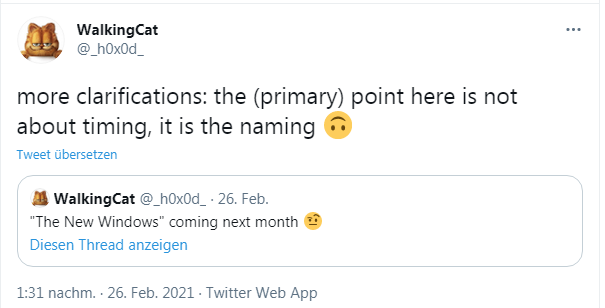 I had deliberately not addressed the topic in the blog. The “product” behind “The new Windows” is Windows 10X – of what we know so far. And WalkingCat had indicated that the name would be announced “next month”. He seems to have been proven right, as at the virtual Ignite conference (Tuesday, March 2, 2021), Windows chief Panoy Panay mentioned a new product rather casually (see Windows Central.

We have new features coming—here I got to tell you this—look and I haven’t talked about the next generation of Windows and what’s coming next, but I can tell you I am so pumped. We’re not talking about that today.”

Which says everything and nothing. The “next generation of Windows” is Windows 10X, which is meant to compete against the highly successful Chromebooks. This Windows will not support Win32 applications at launch, only apps. At this point, I’ll put it cautiously: Personally, I would be very surprised if this “Next Generation Windows” becomes a terrific success. But let’s wait for Microsoft to release a product and see if customers vote with their feet.

Last “thing” to announce: Microsoft has released the upcoming server operating system as Windows Server 2022 as a preview for testing. If anyone is interested in the topic, the announcement may be read here.